Bogota introduced me to a new, unfamiliar friend: altitude sickness. Bogota is 2640m above sea level, which means the air is thinner and you feel like you have a permanent hangover. However the feeling is probably not dissimilar to how one might feel after having 3 hours sleep in the previous 2 days so maybe I didn't have altitude sickness at all, and was in fact, tired. Altitude sickness sounded better and like it would garner more sympathy though, so let's assume it was that.

Apart from its silly setting far above sea level, Bogota is an interesting place. We were warned by the hotel staff not to walk around after dark, hail random taxis or have our phones out, but we never felt particularly unsafe. 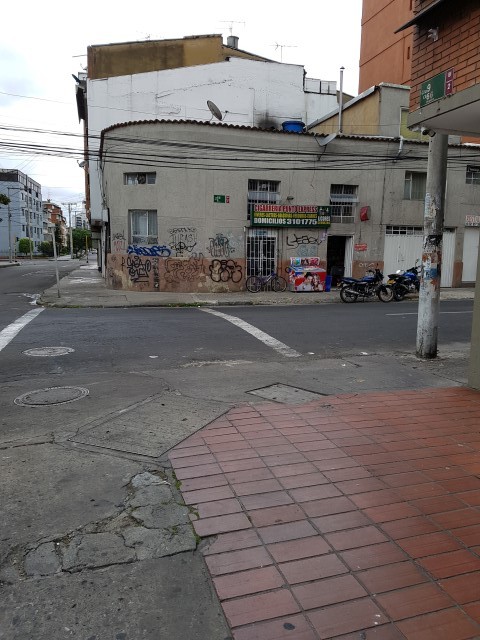 Street corner outside our hotel. Perhaps not the safest-looking bit of Bogota...

We thought we'd have a relaxing first day, what with the jetlag, lack of sleep and altitude sickness. So Dan signed us up for a 3 hour walking tour. Dan and I have different ideas about 'relaxing'. But after some grumbling and repeating the words 'altitude sickness' over and over until they lost all meaning, I had to admit that the tour was pretty great. Our guide brought us all over the region of Candelaria. Dan and I arrived too early for the tour and decided to walk around ourselves a bit first, thinking hm, Candelaria isn't so nice is it... But when we joined the actual tour we realised we'd been one street away from all the pretty bits, possibly in those bits we were meant to stay away from. The tour started at the Museum of Gold (Museo de Oro) which thankfully we didn't have to go to as it sounds very boring. We walked around quaint colonial Spanish streets and drank a traditional altitude sickness cure that looked revolting but tasted pleasantly citrusy. We went to a Botero art exhibit. He's the Colombian artist who painted the proportionally exaggerated large people. I wasn't a fan but there's something sort of endearing about the fat Mona Lisa. 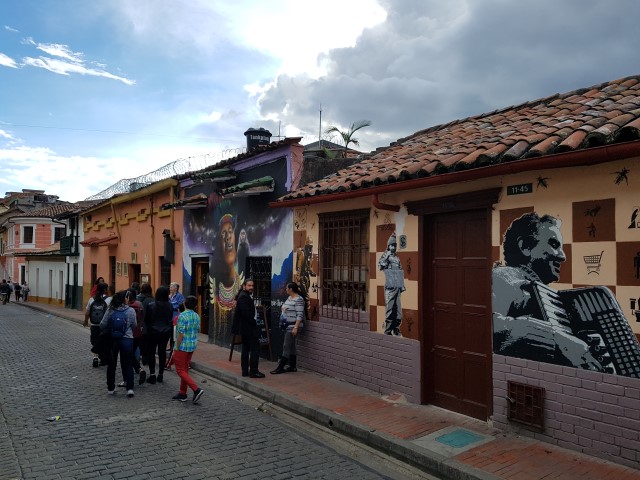 Pretty streets that we totally missed when walking around by ourselves 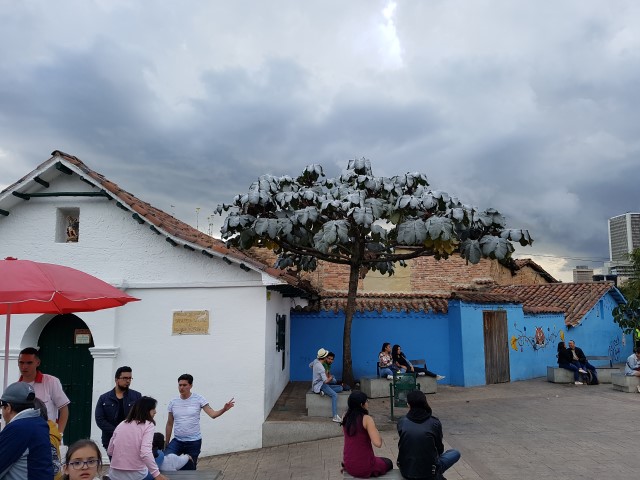 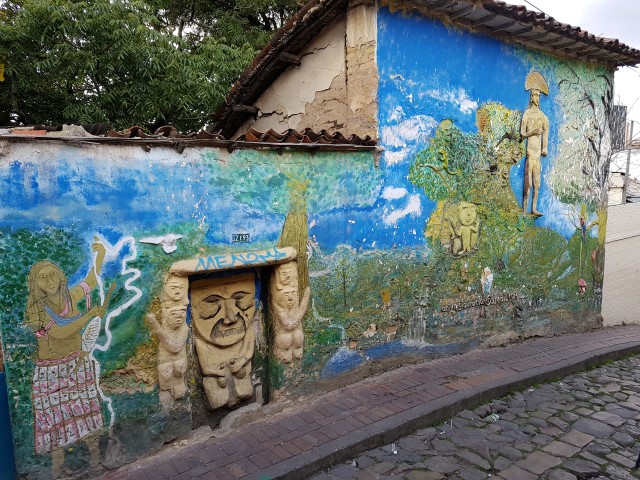 Graffiti is legal in Bogota. Sometimes good, sometimes terrible. But it has a charm

When The Rolling Stones played a gig in Bogota, Mick Jagger stopped by this lady's stand and bought an obleas. It really boosted her obleas business. 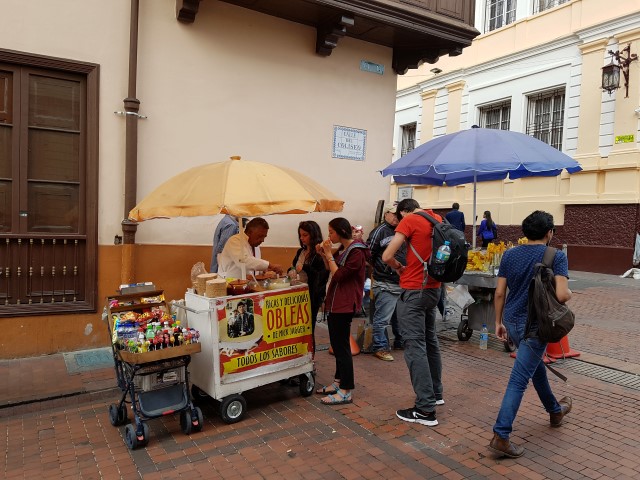 The other obleas-sellers noticed her success so stuck a photo of Mick Jagger on their stands too. His face is on every street corner in Candalaria.

Our guide explained that Colombians really hate Pablo Escobar, which was not a big surprise. He said he couldn't refer to him by name in case locals misunderstood as the tour was in English. But he was happy to answer questions if we referred to him as You Know Who, a suggestion he said came from a British couple who were big fans of Harry Potter. Having not watched Narcos myself, I didn't know much about him, so the tour was delightfully informative. Apparently he turned himself in under the condition that he could build his own prison in Medellin. So he built a fancy mansion, transferred all his prison friends there and had a load of parties.

All our fellow walking tour tourists told us we had to go up Montserrat, a mountain visible from the city below. Don't worry, there's a cable car. We couldn't go the following day, Sunday, because floods of locals go up to the church on top for mass and it's meant to be a bit of a nightmare. So as soon as the tour finished at 5.30 we hurried to the cable car, managing to just get up for sunset. It all seemed extremely fortunate until we tried to get back down and had to wait in a queue for over an hour as the cable car only took about 10 people at a time.

I love a cable car though. 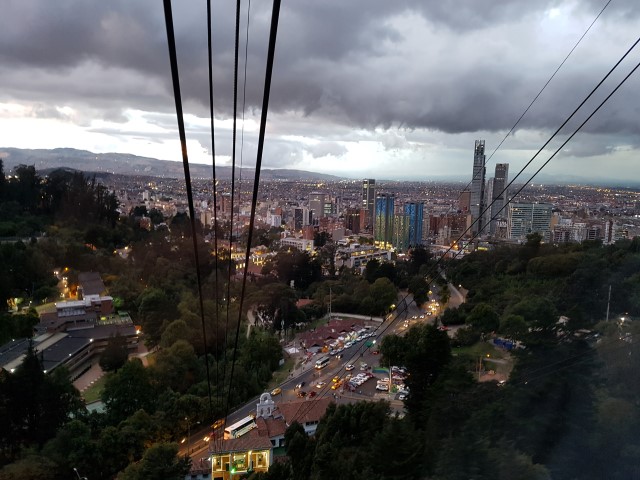 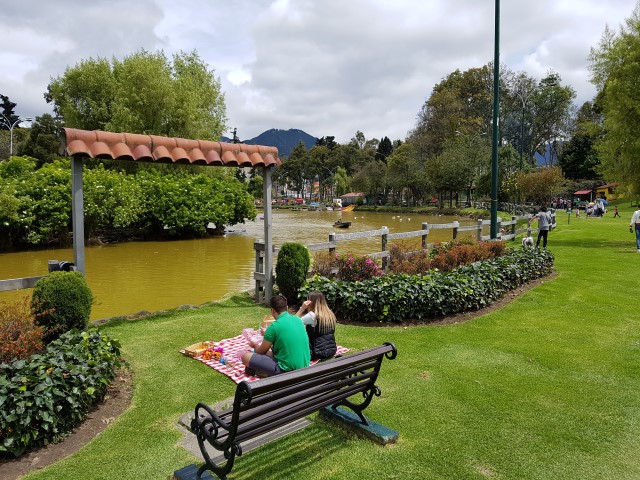 Creep shot of this couple having a romantic picnic

On our second day, we thought we'd go to some parks. There's a cluster of parks about an hour's walk from Chapinero including a Botanic Gardens. The route in was not pretty. Outside of the tourist areas, Bogota is fairly run-down. But the first park was nice. It was a Sunday, so there were lots of families having barbecues and renting pedalos on the lake. I had a grim experience on a pedalo in Sicily once. It was in the sea, and Dan decided to jump off and go for a swim, but the pedalo relied heavily on weight-distribution and I can't swim. So I sat huddled in the centre with my eyes closed until he came back. I hate pedalos.

The next park was closed because there was a massive rap concert on. But the botanic gardens were good. Not sure it was worth the walk in, but there wasn't much else to do in the time we had. We asked an English-speaking waitress in the cafe how safe it was to get a taxi back. A look of grave concern darkened her face and she told us she'd order us an Uber. Ubers are technically illegal in Colombia, but maybe if the taxi drivers stopped scamming people I'd feel worse about it. 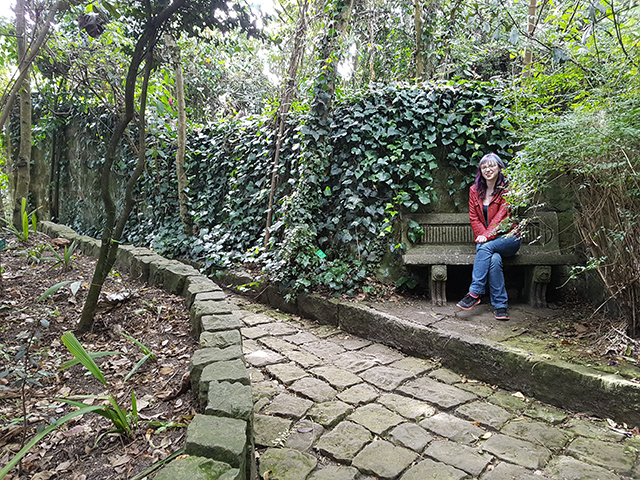 On our third morning, the morning we left Bogota, I woke up feeling great. No headache, no dizziness, no exhaustion from walking up a flight of stairs. My altitude sickness had cured itself just in time for us to drop a thousand feet.

I also finally learned which syllable of Bogota you're meant to emphasise. It's the og bit.

Did you try the obleas? I had to look it up on Wikipedia. Is the altitude sickness cure the coca tea made from coca leaves? Maybe don't drink any just before travelling to the USA.

Dan did. Not really a taste sensation but he got his with all the fillings.