Blog
About
Dell Inspiron 15 7000 Series
Previous
Next
May 2, 2017
electronics
computers

One day, I opened my Dell Inspiron 15 7000 Series (the name is important in case any poor soul decides to buy this mechanical travesty of a laptop) to find the screen was coming away slightly from the casing. I thought "I should really investigate that" and being a normal person, I did absolutely nothing about it. Over the next few weeks, the problem got notably worse. In order to open the laptop I had to open it a little, wedge my thumb in at the hinge and hold the screen down. Once open, I could usually pop the screen back into place. Was that the sound of cracking plastic? No probably not. I'm sure it's fine.

Then finally, about 6 weeks after the first signs of deterioration, the laptop wouldn't open. When I tried there was an almighty cracking-plastic noise and the screen was being bent, coming about 2cm away from the casing. I tried my clamping-it-in-place-with-my-thumb trick but to no avail. The force on the screen was too much.

That very evening, Dan who has the same laptop, bought a few weeks after mine, reported that the screen had started to come away when he opened it. Now I know sometimes people have a warped, favourable self-perception, but I'm quite sure that I'm careful with electronics. I'm generally careful with everything, except my phone for some reason. I don't know why but I'm forever leaving it precariously perched on the couch arm and hearing that horrible "phone just dropped" sound. But other than my phone I'm a very careful person. Almost boringly so. And so is Dan. So let's just assume that we haven't been carrying the laptops around open, holding them by the screen.

They were both out of warranty but I thought this is a manufacturing fault that Dell will fix for free. All the forums said no, Dell will tell you that this is normal wear and tear. In fact the Dell website says that any damage to the screen at all is considered normal wear and tear, even within warranty. Undeterred I went onto their support section. Surely, I thought, if I tell them that two laptops belonging to two very careful people had this manufacturing fault at the same time they'll be reasonable. Well I'll never bloody know. Because to get to their help you have to run a diagnostics check. I shouted at my dad's laptop (which I was using to contact them) that diagnostics aren't going to fix a broken hinge but it was no use. There was no option not to do it and doing it just said that the service tag didn't match. I could have got a monitor and keyboard for the Dell and done it that way I suppose, but by now I was ready to pull the thing apart.

There's an awful lot of cracking-plastic sounds involved with dismantling the Dell Inspiron 15 7000 Series. It's deeply unsettling. But in the whole process I managed to only break off one tiny tab. Anyway I got the first few bits off, hard drive and battery out, then onto prising the inner casing off. But it wouldn't come off. To Youtube! Youtube guy says to turn laptop over and take out the keyboard, because the inner casing is screwed into it. BUT MY LAPTOP WON'T OPEN, I said to him. He didn't listen.

My dad, conveniently a mechanical engineer, suggested we implement a more serious version of the clamping-it-in-place-with-my-thumb method. Using a metal ruler and a lot of care, and a lot of wincing, we managed to get the top up and took out the keyboard. Carefully labelling all the screws and stacking all the parts (see? I am really careful) we got down to the hinges.

The problem seems to be that the hinges are far too tight. They put an inordinate amount of pressure on the screen, gradually pulling it away from the casing. Once it dislodged from the casing, the already very-tense hinge, which had come loose from its own casing, just kept pulling it further and further. I'm not sure if the screen was originally glued into place. No glue was obvious.

At this point I would have gracefully admitted I know nothing about hinges and thrown the whole lot in the bin (or resentfully paid Dell a load of money to fix something they broke in the first place). Fortunately my dad knows loads about hinges. He suggested we loosen off the nut on the hinge so it has barely any tension at all. The other hinge was easily tense enough (that's future Anthea's problem) to hold the screen up. We put some epoxy into the broken hinge casing, holding that better in place. And the last step, which was easily the most nerve wracking, was to drill a hole in the screen casing and screw the screen into place so it wouldn't come away again.

I was easily convinced. My reasoning being that the thing doesn't work anyway, so why not. We weren't going to drill through anything other than plastic and the metal casing. There was a horrible shudder when the drill hit the metal and I did rather worry that it could have dislodged something. We then sanded off the end of the screw with a Rotozip.

I rather wish in the reassembly I'd noticed that every layer labels the screws you're meant to put in. Because it's not quite as simple as just putting screws wherever you see them. In some cases the outer casing is screwed onto a part that's only exposed after you've taken out everything else. But for anyone interested in disassembling their Dell Inspiron 15 7000 Series, the screws you're meant to use on each stage are written down.

So eventually we got it all back together. The hinge worked (better than ever, which really made me realise how crap it was to begin with. Why would you have a laptop where you have to pull the top of the glass screen to open it?) and the laptop still switched on and has sound and wifi and everything. And most remarkably, not one screw left over.

There are many lessons to take from this experience. Look at Youtube first. The order of assembly is probably written on the casing. Don't let things deteriorate into unusable before you try to fix them. And don't buy the Dell Inspiron 15 7000 Series. 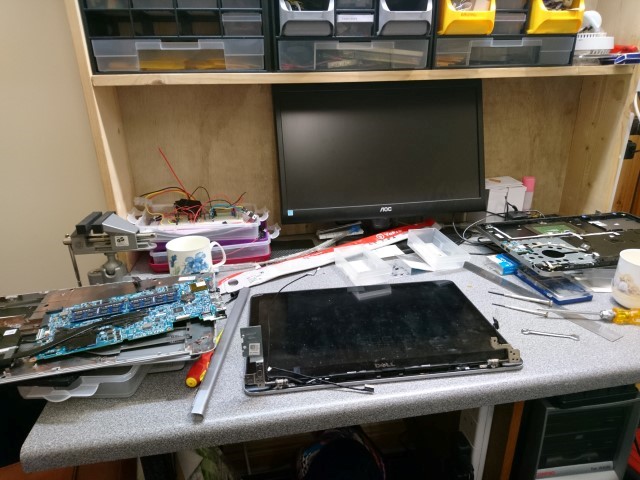 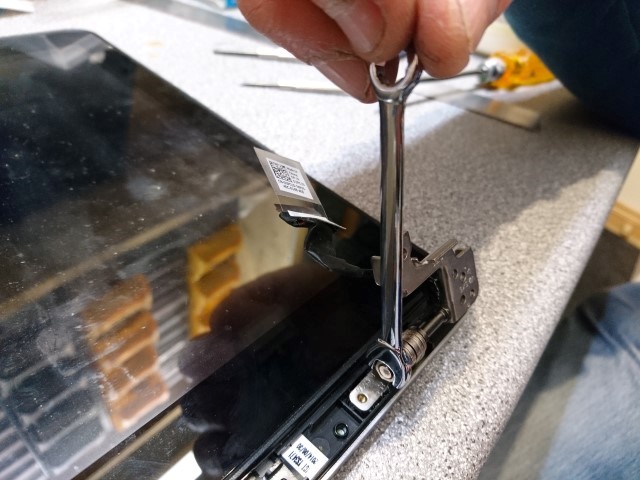 When you eventually get to the hinge, loosen it off. It's pretty tough, especially when the hinge is actually dislodged from its own casing so you've nothing to push against. 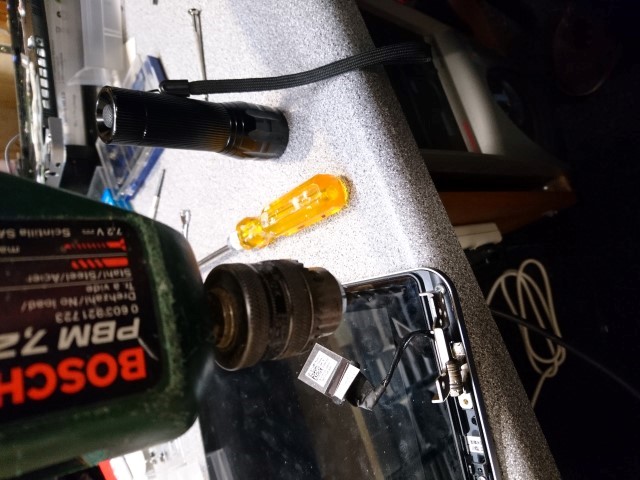 Drill a hole in the laptop. Yep. 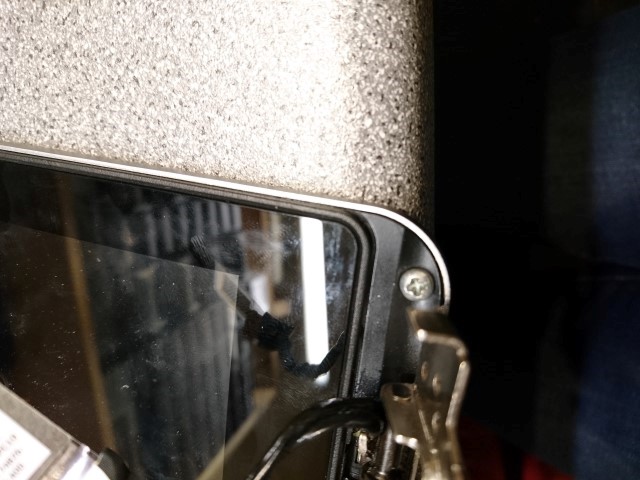 Well you've already drilled a hole in your expensive laptop. Might as well keep going and put the screw in to hold the screen onto the case.

No stopping now. Sand it down. 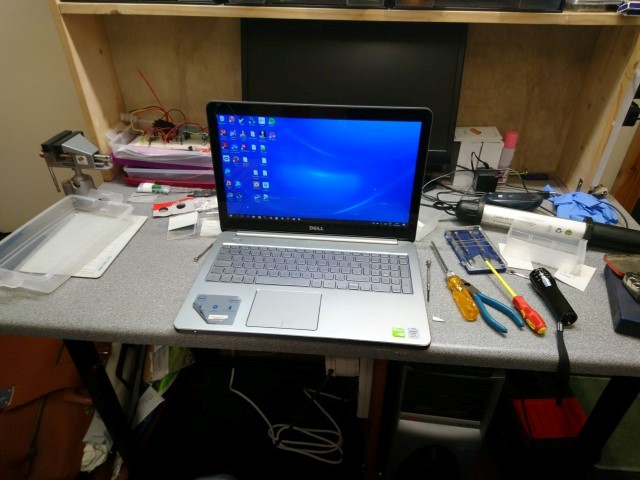 When you've finished putting it all back together, wondering vaguely if you put the wifi card back in, start it up. If it takes anything longer than 4 seconds to boot blindly panic and insist to yourself that it was never this slow before.

Spend the money you would have paid Dell on ice creams.

I expect anyone who's tried repairing consumer grade stuff will laugh at this. I did, and I was there.

I was veering on less cynical side of just plain shoddyness but you may be right.