Flippantly taking our lives in our hands (according to everyone I told I was going to South Africa), we rented a car and drove from Johannesburg airport to Kruger Park. The other drivers were fine, everyone drives on the left (unlike in some countries where side of the driving road seems to be more of a suggestion than a rule), and the roads themselves were grand.

Four hours to Kruger isn't bad, if you haven't just had an overnight connection flight from Saudi Arabia that left at 1.45am. Speaking of which, let's go back for a minute, to talk about Jeddah airport.

Jeddah airport is a strange place. We got in from Athens at about 8pm and the whole place was empty. Apart, apparently, from our flight. But it's not a tiny Knock-sized airport. It's a massive lavish Dubai-style airport. You walk for absolute miles with the rest of the bemused connection-flight people, seeing maybe 3 cleaning staff the whole time. There are also no planes. It felt like we were in a Derren Brown episode, but luckily it was just a very strange airport.

Anyway we made it. Kruger is huge so we stayed in 2 different places. The first was outside, at the Malelane gate, where casual hippos hung out in the river overlooked by the restaurant. Extremely fortunate because as it turned out, these were the only hippos we saw. 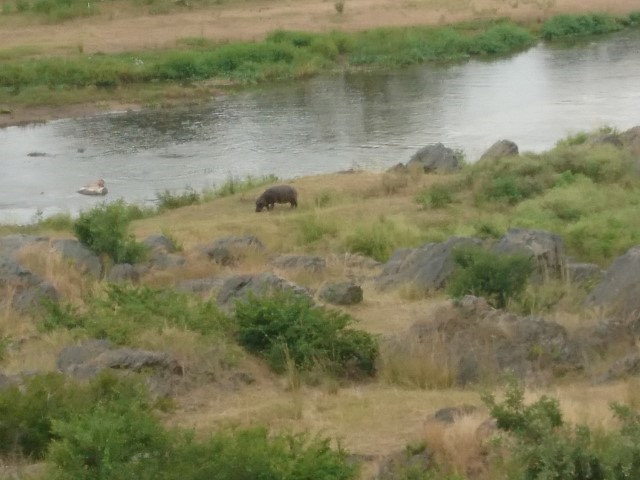 All of our pictures are small and far away. It is probably best to Google images of hippos for a better viewing experience.

The next two nights, we stayed inside the park in an amazing colonial-themed tented camp place that looked like something straight out of a Poirot. On the way we saw everything from The Lion King, except for lions. Right inside the gate there was a rhino. Sadly, even though it's illegal in Kruger Park, there are massive problems with rhino poachers. We stopped in a town about halfway which had a board for animal sightings and it says don't ever mark rhinos because poachers check.

Elephants can be scary when you're on your own, in a car, in the wild. We stopped to look at a group at the side of the road, and suddenly this huge male one got pissed off and started coming towards us. Dan and I calmly assessed the situation:

'DRIVE THE FUCKING CAR AWAY FROM THE ELEPHANT, DAN.'

That's essentially how all of our travel arguments go. We are the two terrible extremes when it comes to reactions.

Anyway eventually he did, but then another elephant comes rumbling across the road in front of us. And he's veering our way. We had to back up, which would mean backing up into the first angry elephant. We were now boxed in by two angry elephants. We backed up the most we thought possible and fortunately he decided he wasn't interested and wandered back off the road instead. When we finally saw lions, they literally lay in the middle of the road, occasionally glancing in our direction and yawning. Lions have nothing on elephants. But The Elephant King would have been a much more cumbersome affair I suppose.

The tented camp did a 5.30am safari and a 4pm safari. We did both, both days. You know how you can go to Japan and get sick of temples? You can get sick of safaris too. They were 3 hours long, 5.30am is very early, and for the first 2 and a half, all we saw was birds. Worse still, the other people on our safari were absolutely mad for birds. They kept making him stop to look at African pigeons and the like, and all I could think was I got up at 5am to sit here for 15 minutes looking at a pigeon and this is 15 minutes not being spent looking for lions.

On our last one, we saw lions. I think the only major thing we didn't see was a cheetah. 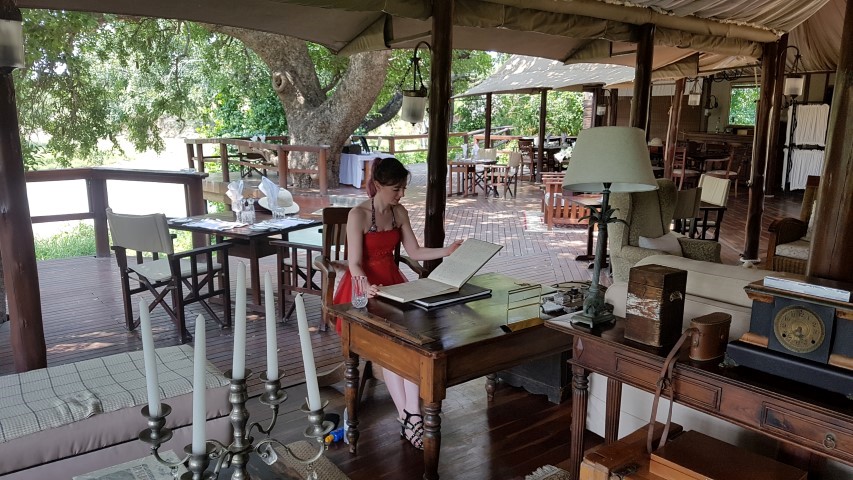 Look at this place! 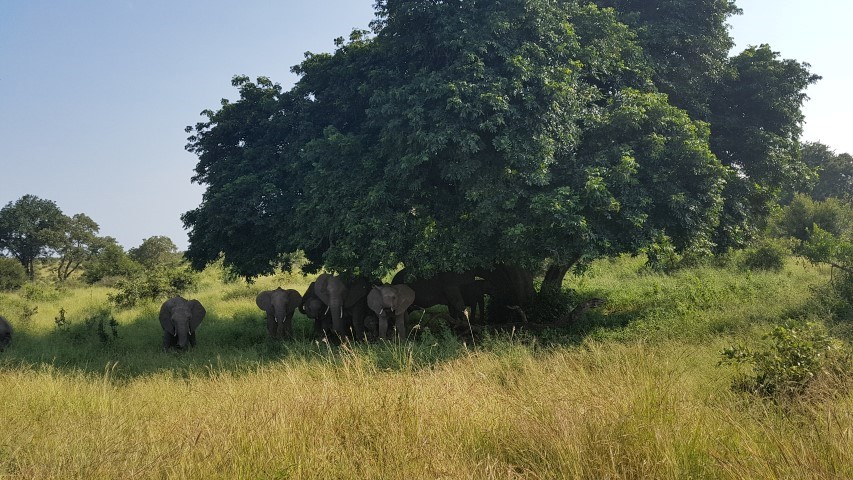 Cute until they try to kill you 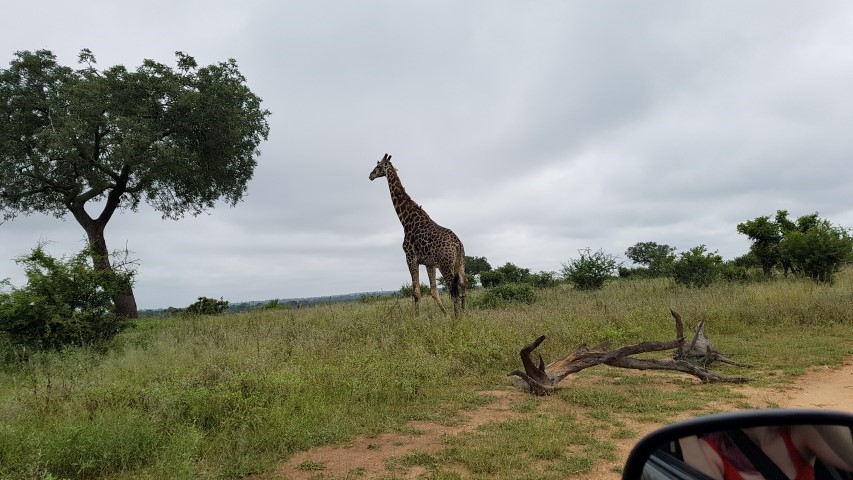 There's something VERY Lion King about seeing a giraffe ambling about 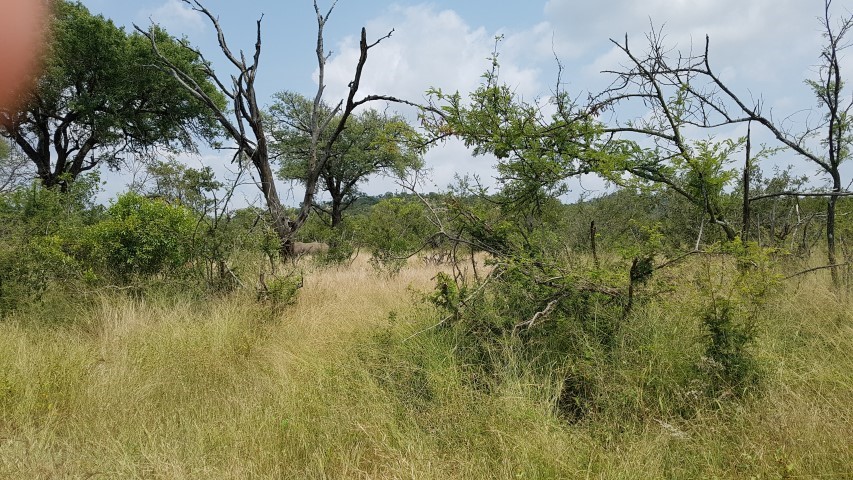 Pictured - the back of a rhino, and thumb 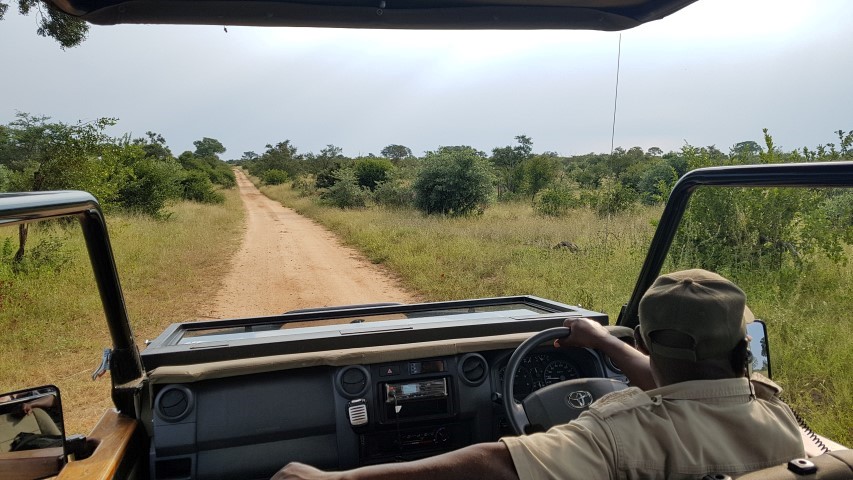 Stopping to look at Africa pigeons 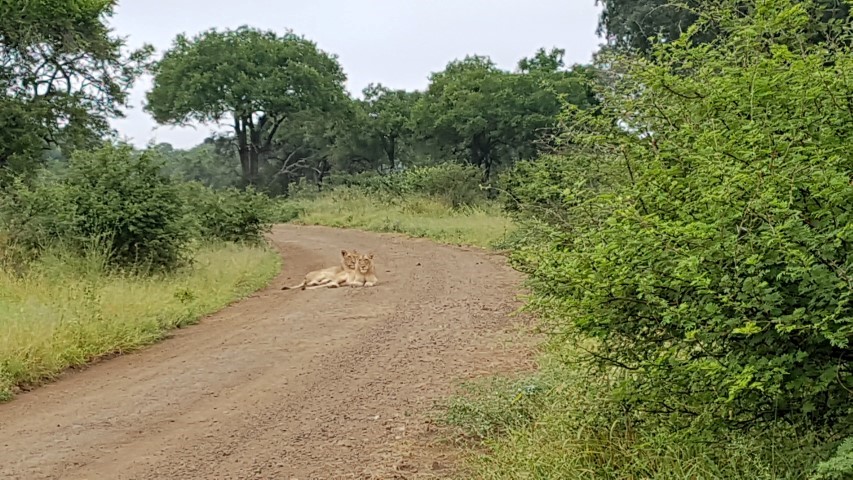 Apparently they get sick of hanging out with the male lion (who we also saw), because he eats all their food. Understandable.

A few years ago, being vegetarian meant everyone you gave you mushrooms. Things have moved on, but South Africa is still firmly in the mushroom phase. This is sad if, like me, you hate mushrooms. At the camp, we had no choice in meals except for meat or mushrooms. The meat dishes looked decent in fairness, so I wouldn't say anything against the chef. Luckily by now I had no appetite from taking the malaria tablets, so food was unnecessary.

One of my favourite brags is that I never get colds. But then I got one. In Africa. This isn't the worst thing that's ever happened to someone, except of course when your cold comes with a cough and everyone around you thinks you have Coronavirus. After Kruger, we drove back to Johannesburg airport where I got to spend a few hours as a pariah.

At this point, we'd gone for 3 days without Coronavirus news because there's absolute no signal in Kruger. There's a difference between turning your phone off but knowing you have the ability to turn it back on, and having no option to use it whatsoever. Having no signal was an absolute delight. No horrible world news, no messages from well-meaning friends and family asking if I'm going to be trapped in South Africa for the rest of the year, or telling me you can no longer buy any food and people are now living off insects and belts.

Johannesburg Airport was our first Coronavirus shock. Temperature-taking, masks, scary disposal bins for masks with the radioactive symbol on them. At this stage, things were ambiguous. A couple we met at the Turkish Airlines desk told us that Turkish were already stopping connecting flights out of Turkey, but there were no travel advisory warnings. We decided to book a new BA flight home a week early, and gamble on our original flights getting cancelled. We looked it up in the airport and thought yes, that's grand. We can do that when we arrive in Port Elizabeth. Of course everyone else had the same thought, so when we arrived in Port Elizabeth the price had doubled. We booked one two days later. It seemed okay at the time.