Port Douglas is about an hour's drive north of Cairns and is supposedly nicer than Cairns. We wouldn't know, as all we saw of Cairns was the airport.

The first thing that struck me about this part of Australia was how tropical it was. It was like being in Bali, except everything was in English and the people are all rich. The drive from Cairns to Port Douglas along the coast is spectacularly beautiful, with jungle leading down to an expansive beach. Filled, according to many signs, with jellyfish. 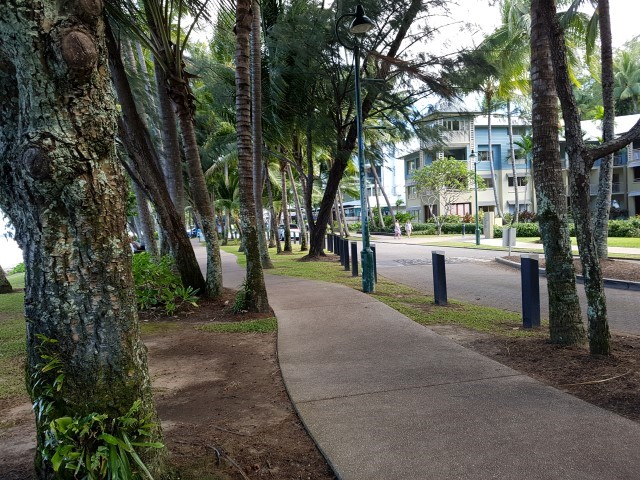 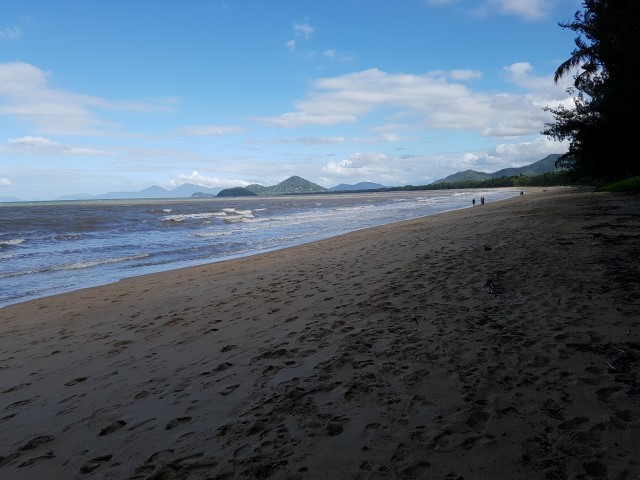 Port Douglas is idyllic. Like a tropical Australian North Berwick. The buildings are weatherboarded and the streets are immaculate. They do terrible cheese toasties. 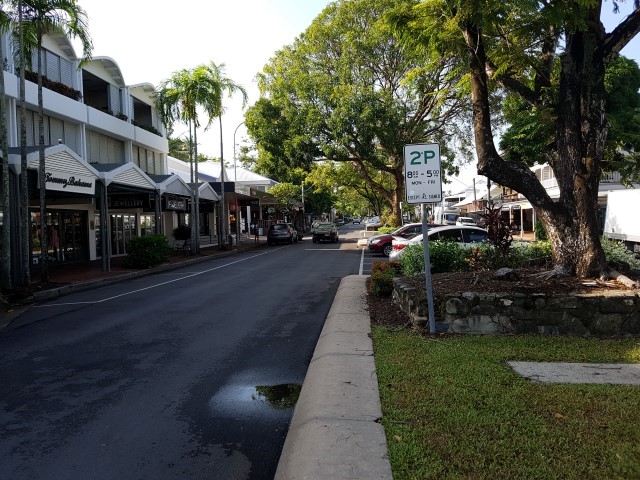 As I've previously mentioned, my parents travelled a lot in Australia when I was a baby. There's a photo on their kitchen wall of me, aged 1, with a tiny ponytail plume (I didn't have much hair and my mum was determined to make the most of it), standing at the window of the Kuranda Scenic Railway train.

Kuranda - a rainforest town - is very close to Cairns and recreating that photo was one of my top priorities for the trip. We were devastated to learn that recent flooding had forced the railway to close for the past few weeks, and delighted to learn that it had just reopened. Honestly, that conversation was a rollercoaster. So we drove to the station, boarded the train, spent about 20 minutes trying to get the photo right, and the rest looking at the rainforest from a comfortable distance. 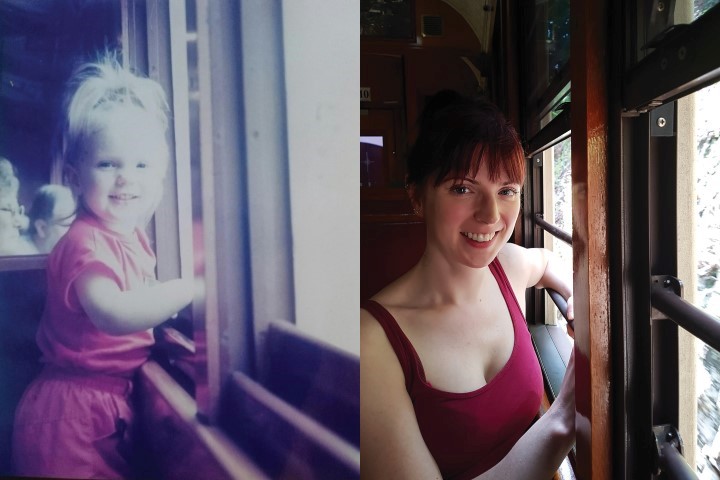 You know how with some people's childhood pictures it's really obviously them because they had distinguishing features? I could not have been a more generic-looking child. If you wanted to show an alien what 'child' looked like, show them this picture. "Oh it's you as a child! You had a face."

There were 4 people, student-aged, sitting behind us who spent almost the entire train journey playing Candy Crush on their phones. 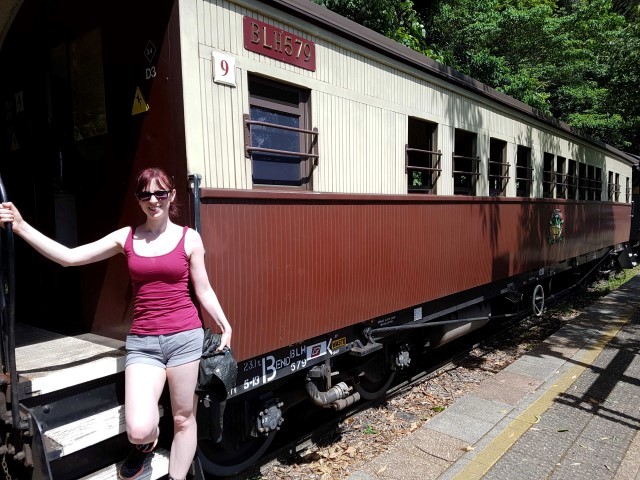 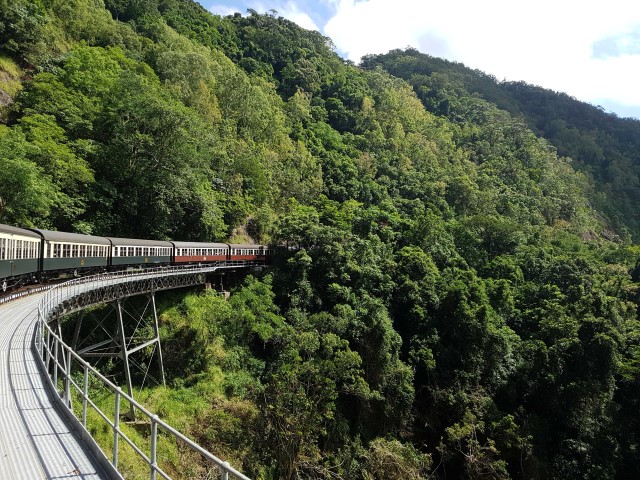 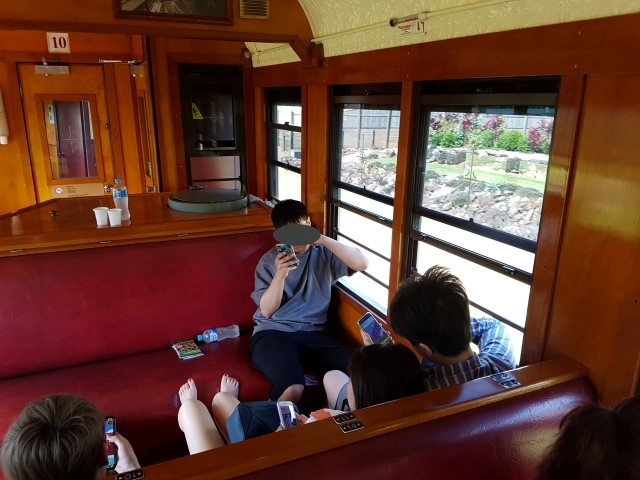 Kuranda itself is a town that sells sandwiches and tourist tat. Aside from a nice jungle walk that we did, there wasn't a whole lot to see. It's all about the train up there.

We took the Sky Rail back, a rather terrifying cable car experience, where it shoots you back down the mountain at a great height in a plastic bubble. I have no real fear of heights but I felt rather dizzy going over some of the gorges. 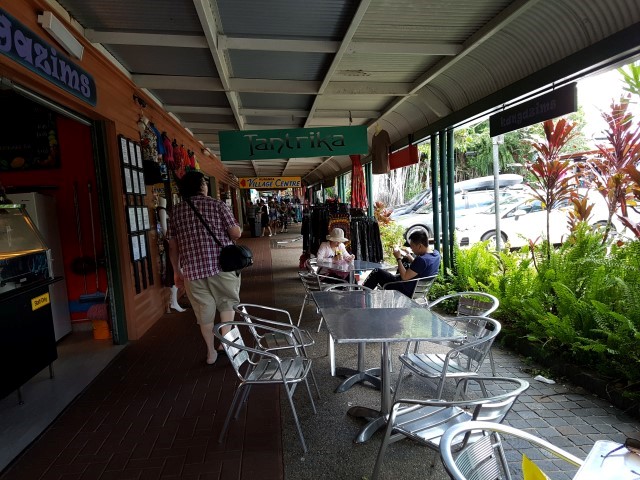 Much tourist tat to be had. Dismissive though I sound, I bought two dresses and 4 coasters 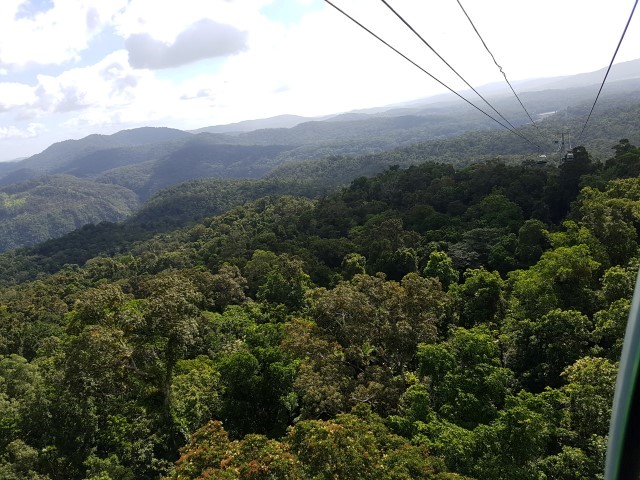 This was a bit much.

The Great Barrier Reef is probably first on people's lists when they're near Cairns, assuming they didn't have a childhood photo taken on the Kuranda Scenic Rail. We had to wait a day for the weather to improve, so on the in between day we went to Daintree Rainforest. Or a close bit of it anyway. The full Daintree experience is a much longer drive and involves a ferry crossing. I didn't even particularly want to go to another rainforest, so we settled for Mossman Gorge. Mossman Gorge is closer. We did rainforest walk, but I've seen so many rainforests at this stage that you could plonk me down in any one of them and ask me where I was and I'd have no idea. 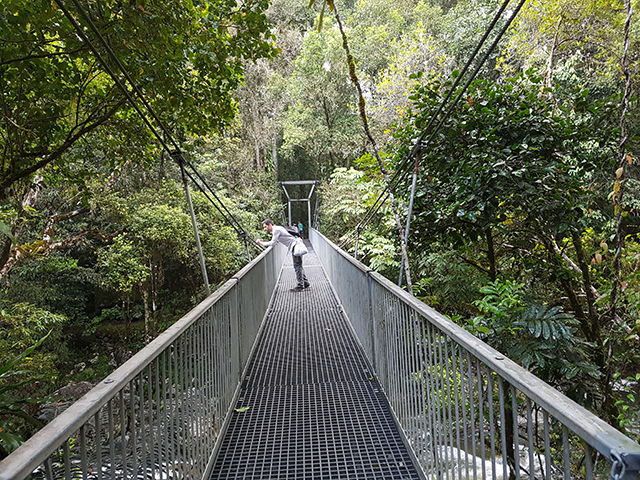 Considering my dire swimming skills, we chose a GBR trip where you get a ferry out to a pontoon that's anchored to the sea floor. From here you can have a cup of tea, scuba dive, snorkel and look at an real life underwater aquarium from the lower level. The ferry took an hour and a half and would have tested even the sturdiest sailor's stomach. I might have felt ok if it wasn't for my hugely inconsiderate fellow passengers and their green complexions. It was a long hour and a half.

Bafflingly when we arrived on the pontoon there was a full buffet and everyone from the ferry piled into the queue. Eh, were you not just heaving over the side of the boat ten minutes ago? Dan and I felt a little too shaky to eat, so he persuaded me instead to just try snorkelling.

I was reluctant, but somehow found myself stuffed into a wetsuit, and a life jacket.

'First time?' one of the helper lifeguards asked.

I tried to explain that I was really only considering things at this stage, but he was Australian and they don't believe in faff, so suddenly I had a snorkel affixed to my face and a buoyant pool noodle shoved into my hands.

'You can't sink,' Dan insisted, 'you're wearing 8 life jackets.' And eventually, still clinging onto the railing of course, I lowered myself into the sea.

Very tentatively, I gave the breathing a go. Then I put my face in and absolutely panicked because the sea bed was very very far beneath me. I took some time to regroup, emptied my snorkel of panic water, and tried again. After a while, it was ok. And after more of a while, I started to enjoy it. After the most of a while, I couldn't believe I'd even considered not trying it.

The reef is fairly bleached. I've seen photos of its heyday and sadly there's a significant difference. But it's still beautiful and there are so many fish. We went on a snorkel tour with a marine biologist. Unfortunately no sea turtles or sharks. He'd been warned that I'm a terrible swimmer and kept checking if I was ok, which was fine, except when we were swimming back I inhaled some sea water and started coughing.

'SHE'S CHOKING!' cried out another girl on our tour, frantically trying to get his attention. I tried to wave to indicate that it really was ok, if unpleasant. But waving means panic. So then I tried to do the ok hand symbol but he was already hurtling over.

'Do you need a lifeguard to bring you back?' he shouted.

'WE CAN GET A LIFEGUARD.'

After a lot of persuasion he conceded. At one point I was worried the helicopter was going to come out for me. 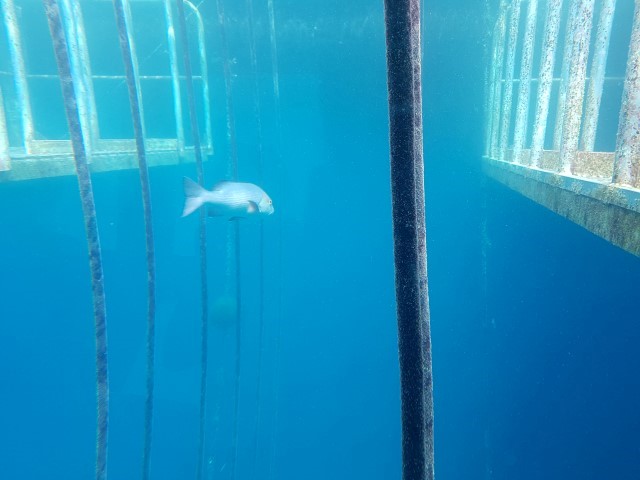 Fish from the acquarium 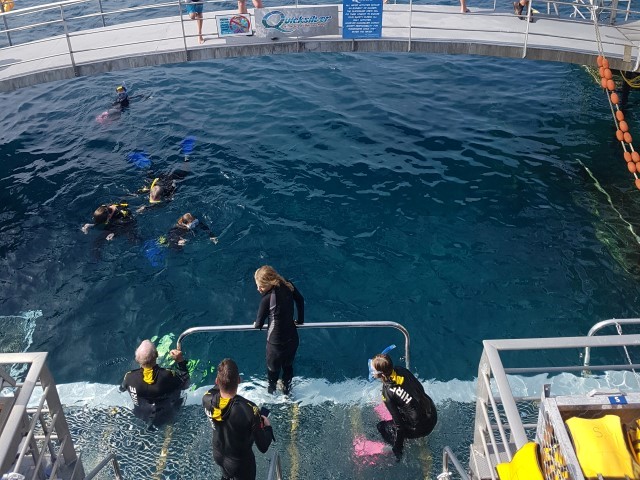 Here's not us getting ready to go in

On the trip back to shore, some nice Americans gave us seasickness tablets and told us how much they hated Trump. Both good.