Since we were only spending 2-3 days in each place, and had planned to visit 7 places over our three-week period, we thought we'd end our trip with a nice relaxing beach-front hotel in Drake Bay. Two hours from Manuel Antonio is a town called Sierpe, that no one in our trendy hostel had heard of. We'd planned to get a bus, but left it too late and all the seats were booked. We tried to plan another bus, but all the seats on all the busses in Costa Rica were booked. We tried everything, but in the end had to take the hostel's shuttle that they'd been pushing on us since we arrived. They did knock down the price, and the driver had a sat nav, so it wasn't too bad.

We arrived in Sierpe in blistering heat and waited 2 hours for the boat to Drake Bay. When the boat was suitably packed with the population of Sierpe, we set off peacefully down a river, then rather unpeacefully into the sea. The closer we got to Drake Bay, the more clouds covered the sky and the rockier the boat became. We arrived after an hour, drenched, but happy to not be on a boat anymore. 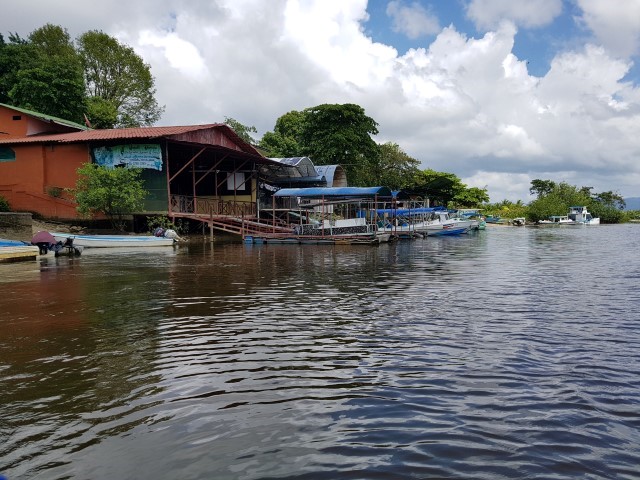 It started off well

'Shoes off!' the boat guys said, gesturing to the knee-level water we now had to wade through to get onto the beach. We followed the nice lady from our hotel up the beach and onto the road, where we walked barefoot for about five minutes until we got to the hotel. By now there was no sun and a smattering of rain. The hotel itself was lovely, the room being by far the nicest we've had since we arrived in Colombia. And our balcony had a hammock, which was good news because on our way I'd said to Dan that if there was no hammock I was going to throw an absolute hissy fit.

It was already late afternoon when we arrived, so all we did was talk to one of the staff about all the exciting extreme tours we could go on for the next two days. I was still feeling faintly ill from the boat and the Costa Rican tap water, so I must have gone a delightful shade of green when she started talking about ziplining. We settled on a national park tour with the other 3 hotel guests because, you know, we hadn't seen enough national parks yet. But it seemed the least extreme thing on offer. Also they wouldn't have run it without us.

The national park tour naturally started at 6am. They encouraged us to get up at 5am so we could eat a big breakfast, preparing us for the day ahead. When we were suitably full of breakfast, our guide arrived and told us that although the weather wasn't great, we should be ok to get the 40 minute boat to the national park. There were several things wrong here. Firstly, I had vowed to everyone in the hotel that after the previous day's boat adventure, I'd never be getting another boat. Secondly, we had just eaten a monstrous breakfast. Thirdly, the weather wasn't "not great". Overnight, some sort of small typhoon had blustered into the bay.

Since we'd already paid, we sadly waded back out to the boat and spent a torturous 40 minutes gripping the edge and staring intently at the horizon. At some points the boat was almost vertical. When we arrived, a river had formed blocking the way into the jungle. No worries, it's only thigh-high right now so we can wade through. After about twenty minutes of walking, our guide admitted that the tour would be better if the rain wasn't so heavy. At this point we were walking through a newly formed lake, unable to see our hands in front of our faces. Did you know you can get cold in Costa Rica? I know you can get cold in Costa Rica. So we headed back. The river was now about waist-high. We hung around the park ranger's shelter for a bit, the guide saying we could wait and see if it clears up then try again. But the other couple said no, let's go now. I said, could we not just wait half an hour? The guide said no, they want to go. So off they went, leaving me, Dan and one other lady alone on the beach for two hours. Of course about half an hour after they left, the weather started to pick up. But we couldn't do anything because we now had no guide. 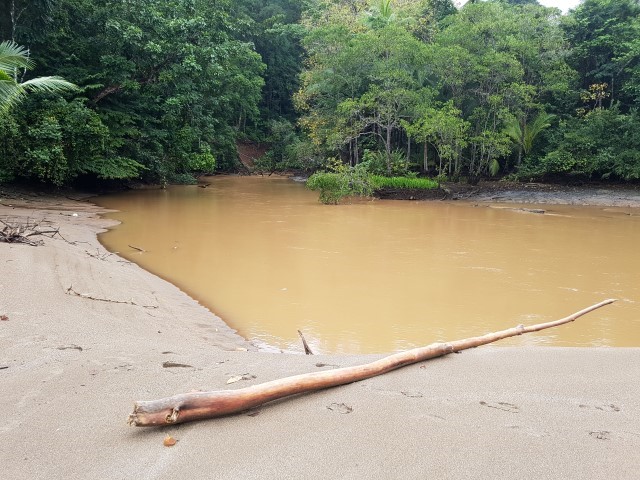 I wasn't prepared for this level of wading 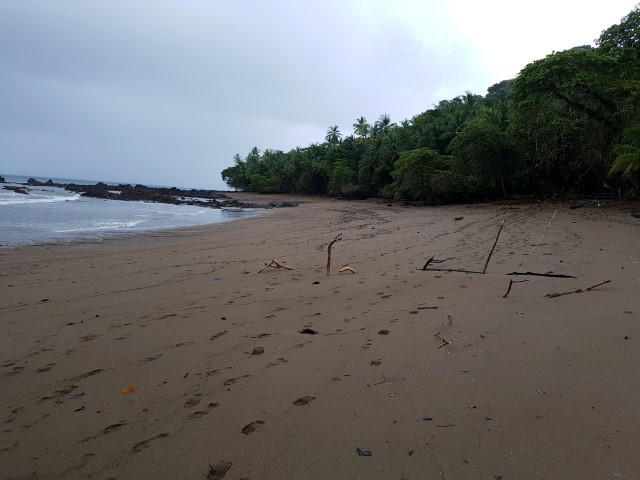 We got to know this stretch of beach very well 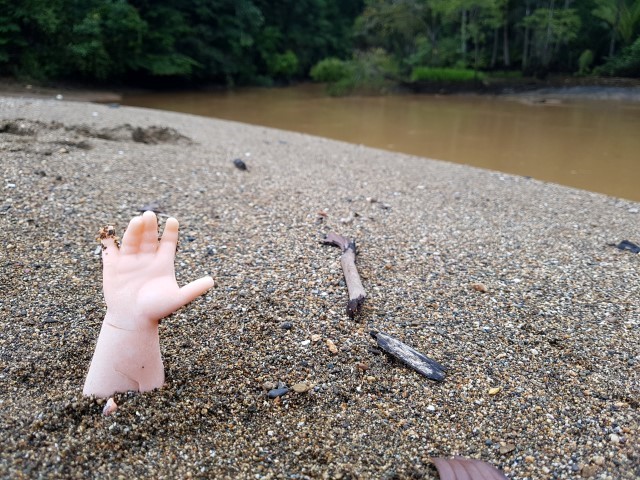 Hello to you too, creepy washed-up doll hand

By this point, Dan was very sad. In fact, I thought, he was too sad. His sadness, on top of everything else about the terrible day, was annoying me.

'What is wrong with you?' I demanded.

'Nothing. Just not a great day that's all.' He climbed onto a rock and stared morosely out at the horizon.

This was very out of character. I think we could both agree that the day had been fairly crap, but surely not staring-morosely-out-to-sea crap. It was only one day of a 3-week holiday after all. Following a tense argument, I stormed off and hung out with Gina instead, the other lady on the tour, until the others got back.

When they returned, our guide announced it was time for an hour-long lunch. By this stage, tempers were high among those of us left on the beach for two hours. He said we should be able to do a bit of a walk on the other side before heading back. Okay great, let's go then. No, first we eat. For one hour. 50 minutes into this needlessly elaborate meal, the rain started again. I watched with barely-contained simmering rage as our guide slowly finished his bag of crisps, then began slowly packing everything back up. By the time we got back into the jungle the rain was no longer drizzle, but luckily not yet the torrent it had been before.

Fluffy Costa Rican animals don't like rain any more than tourists do, so all we saw was a few insects and one confused howler monkey about one mile upwards shrouded by leaves. We persevered for an hour, everyone glancing nervously towards the sea as the winds picked up more and more. 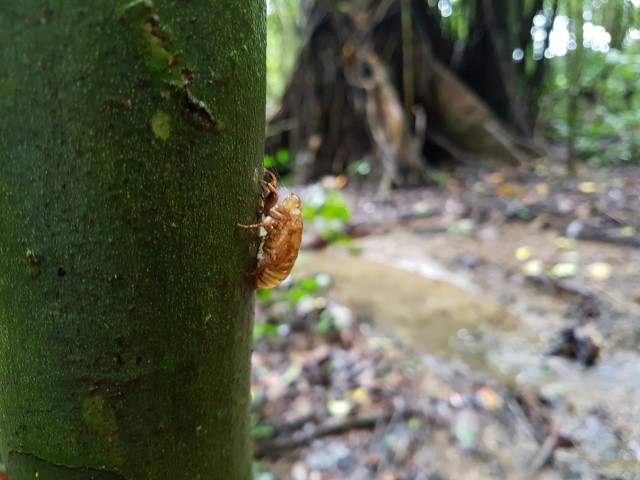 By the time we got back to the ranger's shelter, I assumed he was going to say it wasn't safe to sail back to the hotel.

Nope, it was safe. Everybody on.

Bizarrely, though it was far choppier than the route over, because we were travelling with the waves no one felt seasick. We did, however, think we might die.

We arrived back soaked to the bone, had a lukewarm shower (there was no temperature setting) and had the most wonderful cup of tea I could ever remember.

Then the storm really kicked up and the power went out. Over a necessarily candle-lit dinner, we learned that the national park was a popular drop-off point for cocaine smugglers and the rangers face almost-certain death if they see anything.

The next day, the storm passed. The power decided it wasn't really ready to face the world yet. A new family had arrived and were voicing concerns about their flight back the next day. Like us, they were planning to get a tiny plane from Drake Bay to San Jose, then travel on from there.

'What's the issue?' we asked, as they were questioning a man working in the hotel.

The road into Drake Bay was now blocked by a sizeable river.

'What about another road?'

The hotel guy stared back at me. 'The road is blocked by the river.'

Was there a way across the only road into Drake Bay?

'You could wade. It is now about chest-high.'

'We have two rucksacks.'

Dan and I thought about it. The alternative to wading through the river would be getting the boat back to Sierpe, then a 6-hour bus to San Jose airport. We told him we'd just go for it. Surely we'd be able to shower somewhere before the flight home.

'Great!' he said. 'Except you should know that your plane may not take off.'

Given the frequency of the storms, there was a high chance we'd wade through the river, then have to wade back, and be too late to get the boat and bus to San Jose.

In the end we decided on the boat and bus. Most annoyingly, the plane did take off, so we couldn't even get a refund.

That stressful interlude over, Dan and I went for a walk on the beautiful beach, in the now beautiful weather, and I found out why he'd been so sad. He asked me to marry him, and had waited 3 weeks carrying the ring all over Colombia, imagining Drake Bay would be the most idyllic setting. When it turned out to be quite possibly the worst part of our whole trip, he'd wished he'd picked any number of other places along the way. He did say that he'd decided if it wasn't going to be romantic, he'd wanted it to be funny, and had wished he'd brought the ring along so he could have proposed on the roller-coaster storm boat the day before. 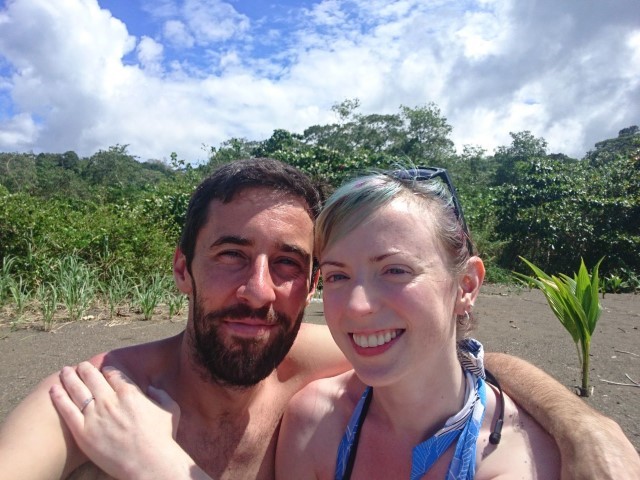 I sent this picture to friends and family with the caption "News". Apparently most of them just thought I was sending them a picture of me and Dan on a beach and thought "er... That's nice?"

We began the boat-bus trek back the next day and were most distressed to arrive in San Jose airport that evening and find our flight had been cancelled. Next flight out was the following afternoon. They put us up in bland-but-pleasant hotel and I've never seen so many grumpy people sitting around a pool.

San Jose to Paris, stopover for a few hours, then Paris to Edinburgh, meant when we got home we hadn't slept for about 36 hours. It was evening, so looked like it was going to be ideal. Get home, have a shower, buy a frozen pizza, go to bed.

Except our flat had been broken into.

They stole my laptop. I can only hope that whoever bought it off Gumtree reads my blog and notices the screw drilled into the case. So far, no success on that front.

I will say, the stress of dealing with a break-in after a long distance flight and no sleep is a good way of mitigating jetlag.