Defying all expectations, we made it out of Colombia alive. Our first Costa Rica stop was Arenal, an area of tropical national parks surrounding a volcano. Getting there from Cartagena was standard. Deathly early flight to Bogota, stopover, flight to San Jose, 6-hour wait in a giant all-American Dennys by the airport, then a 4-hour bus to Arenal. Easy.

We stayed on the outskirts of nearby town La Fortuna. As we found out when booking, everything in Costa Rica is extremely expensive. So gone were our nice cheap hotels of Colombia. It was now time for a more basic (though still far more expensive), hostel alternative. Most of the countryside accommodation in La Fortuna comes in the form of cabins, or lodges. Ours was clean and had hot water, but the wifi was devastatingly bad. On our last day we had a couple of hours in the morning before leaving for the airport and I almost used my laptop to smash up their modem when trying to upload my Medellin blog post.

The weather was a little unhinged, but we did get some nice clear skies where you could see the volcano from our cabin. 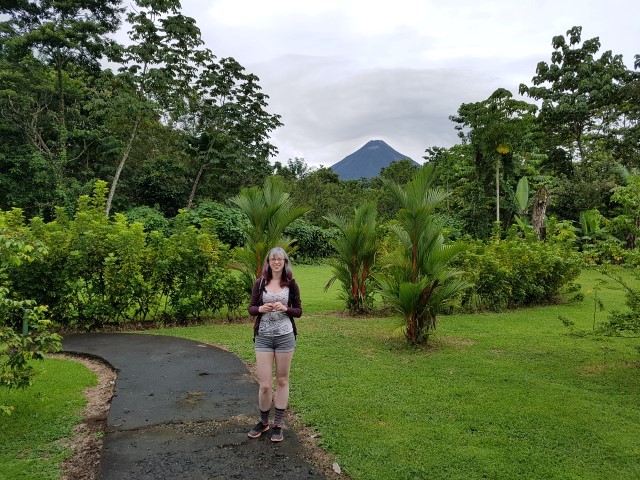 Costa Rica is really into activities. You can't walk a mile without having someone zipline over you. White water rafting, waterfall hiking, kayaking, extreme kayaking, extreme zipline into kayak for white water rafting. It reminded me of Queenstown, NZ, where if you weren't careful you'd accidentally find yourself in a bungee jump queue when you were just trying to buy crisps in the supermarket.

I used to feel slightly guilty about not wanting to do extreme zipline rafting, or whatever. But now I've reached an inner peace where I don't care in the slightest. Also, I can't swim. But if you don't want to do stuff that requires a helmet, Costa Rica is basically one big national park divided into smaller national parks. So you can look at them instead.

On our first day, we visited the Hanging Bridges - staggeringly tall suspension bridges joining up paths of a jungle hike. It took about 2 hours to do the walk. You do get some spectacular views from the bridges but unless you are a completely insane adrenaline junkie, you're mostly thinking 'dear God get me off this bridge'. Since it only took 2 hours, we had to go find another activity. Cue our second two-hour hike, this time up to the volcano basin to see all the volcanic rock and a decent view of the surrounding area. We did not climb the volcano. 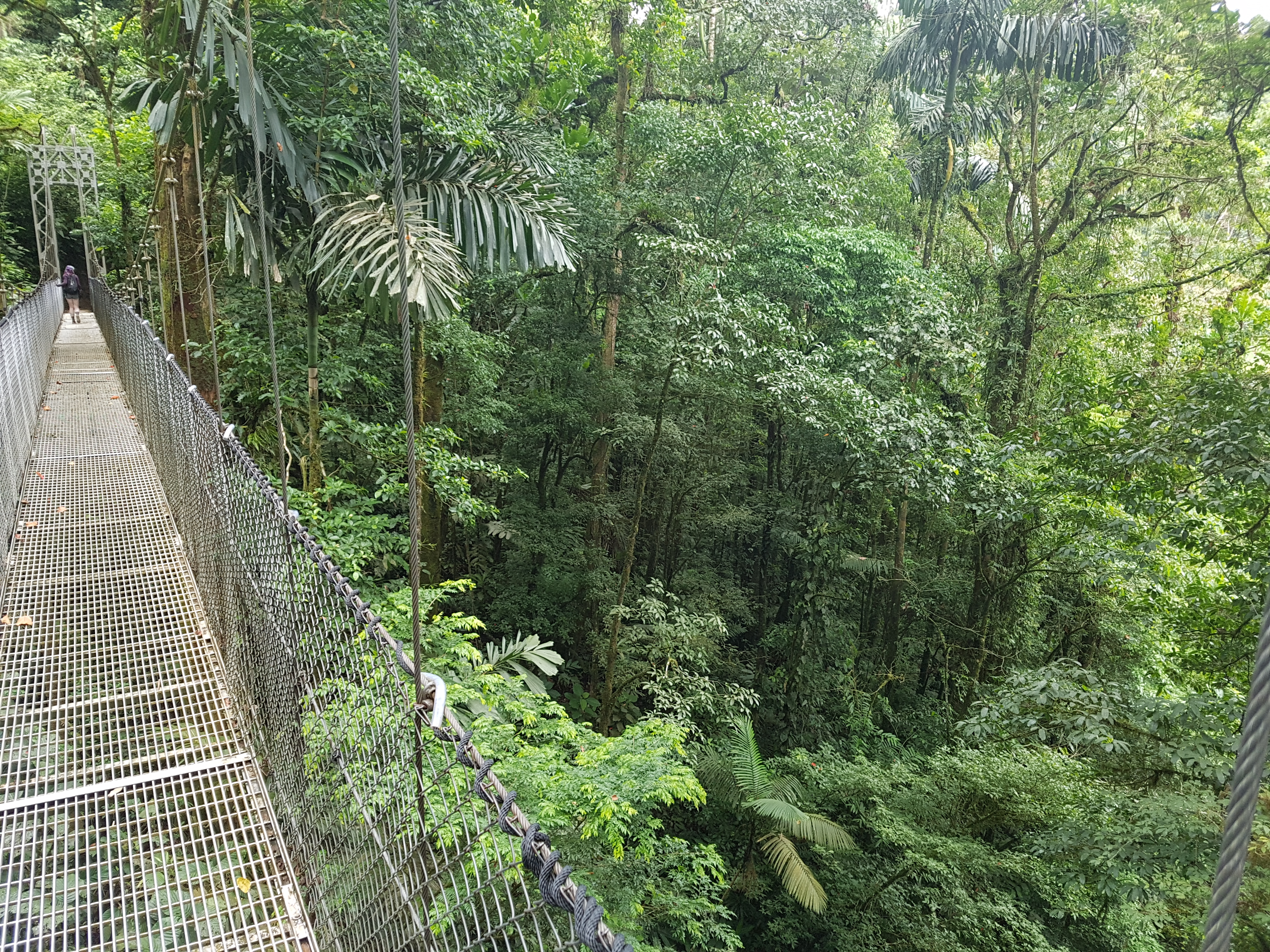 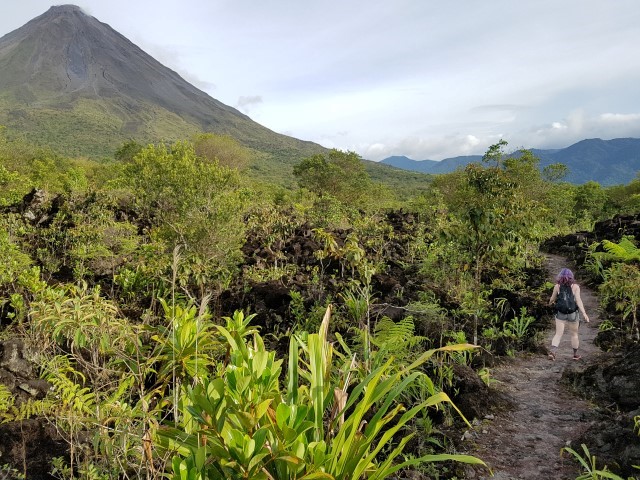 Not shown: Decent picture of volcanic rock. But did you really want to look at that anyway?

Because of the volcano, Arenal is rife with natural hot springs. Many resorts are centred around them and for a hefty wad of cash, you can visit. So we spent our evening hopping from spring to spring in a resort where renting a towel cost more than 3 nights in our cabin. They had done an amazing job of converting the springs. Some were quite natural streams and little waterfalls, still with the stones and sand at the base. But for the less hardened traveller (perhaps one who does not own a fine pair of combats), they also had paved pools. As it grew dark, they lit up the springs with pretty lights. It was a delight. And unlike in New Zealand, there was no overwhelming smell of sulphur, meaning we didn't ruin every item of clothing we brought with us. 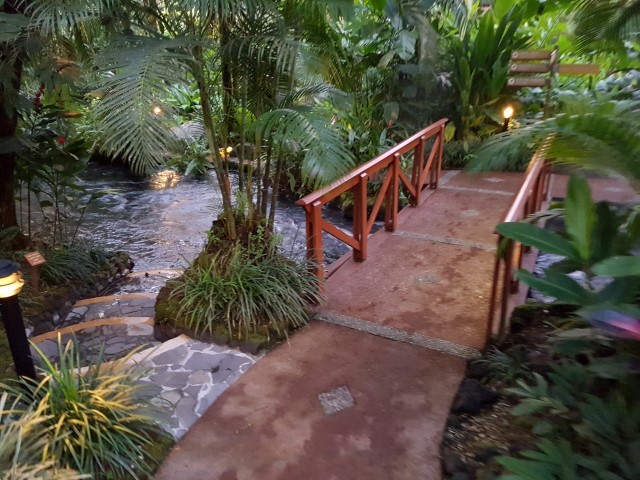 The following day, we undertook yet another jungle hike. This time, to see a magnificent waterfall. We tried to walk but two huge barking dogs were chasing people going past their driveway. A taxi is a small price to pay to not get rabies. Once there, It's easy getting to the waterfall. 500 steps down. But then you have to get back up. Luckily they had motivational signs for the climb back, giving us sage advice from Guru Sloth. 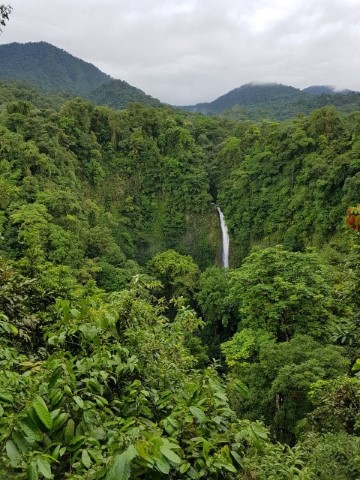 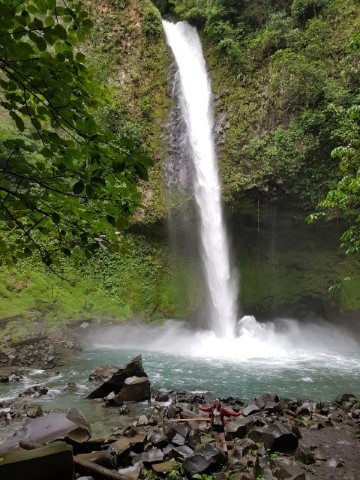 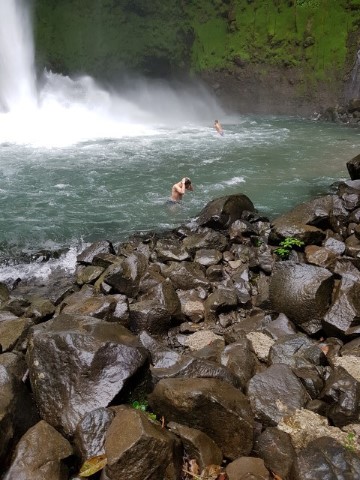 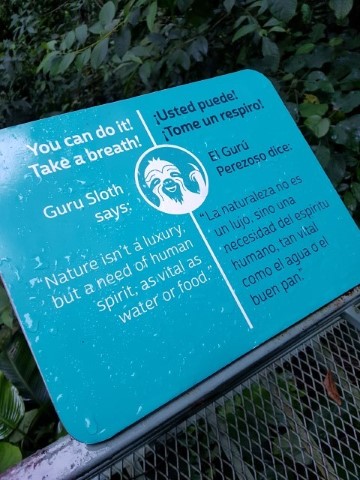 As always, Dan swam and I took photos. Even if I could swim, I'm not sure I would have. Because the waterfall is so tall, it fairly smashes the water at the base. You can't swim too close because the currents are so strong that you might get sucked in and not be able to get back out. Also it was bloody freezing.

With not much time left on our last day, we had a look around La Fortuna. There's not a lot to see. It serves as a base for all the extreme activities and has some shops, hostels and restaurants. 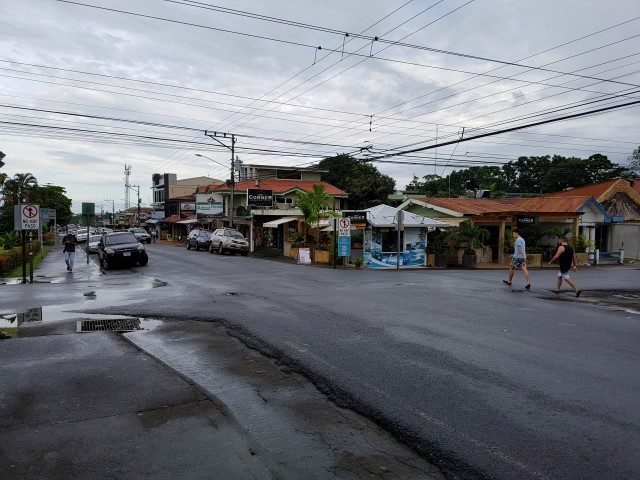 One thing about Costa Rica is that mostly the water is safe to drink. Good news! But the bad news is that even safe water can wreak havoc with your delicate constitution if you're not used to it. Furthermore, if the water is considered safe, it will be used for everything so is completely unavoidable. So on our first Arenal morning, I woke up with a pain in my stomach. It eased off a bit. Until the next morning. This, sadly, was to become an unavoidable theme of Costa Rica.

They have loads of geckos. I love geckos.