Bogota, Medellin, Santa Marta, Cartagena is arguably a trip through Colombia's 'tourist centres' (a phrase I use lightly as Colombia is still far from touristy) from least to most attractive. I highly recommend this route, and not the reverse, as that would be a rather grim way to end your holiday. Although Medellin and Bogota do have safe drinking water. Ever try have a shower and not get your face wet? It's no mean feat.

Cartagena, like Santa Marta, is on the sea. You can stay in a resort hotel on the sea front, or you can stay near/in the walled city. There may be other tourist areas, but we only had 1.5 days so that's the extent of our knowledge. We stayed a few minutes from the walled city and didn't have time to see the coastal bit. But figured we saw a good beach in Santa Marta anyway.

Buoyed by the success of our free walking tour in Bogota, we signed up for another one in the walled city. This one was shorter, less fluent and far more rehearsed, but he did give out postcards for answers to impromptu quizzes. Postcards and post in general is like golddust in Colombia so we fought the other tourists tooth and nail to win one. They, oddly, didn't seem fussed. It wasn't even a real postcard, just an ad for the tour with tour info where you're meant to put the address. I tried to send it to my friend Keeva so I'll be interested to see how liberal the postal service are.

Cartagena's walled city reminded me a lot of Havana, with its turrets, barricades and old Spanish-colonial architecture. It was more pristine than Santa Marta, but because of this, I found it a little less genuine. There were no kids practicing break dancing routines on the square, for instance. There were instead, 40 taxi hawkers. 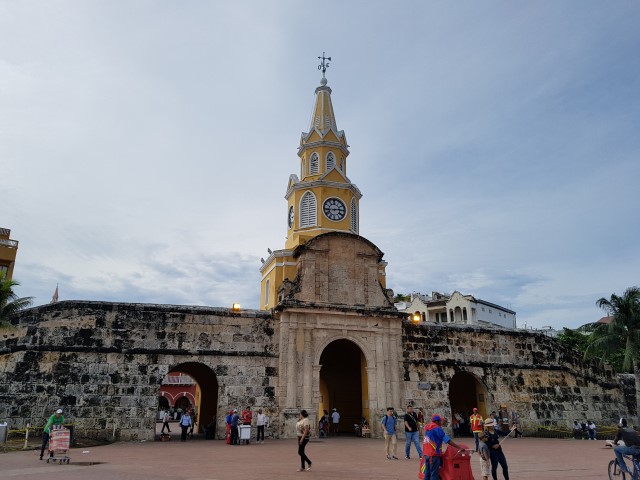 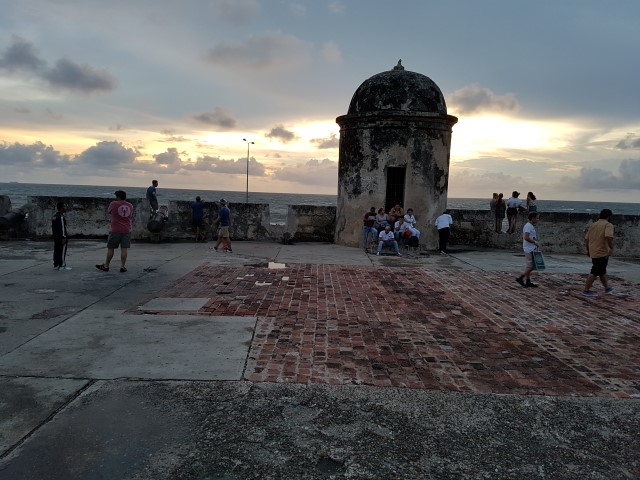 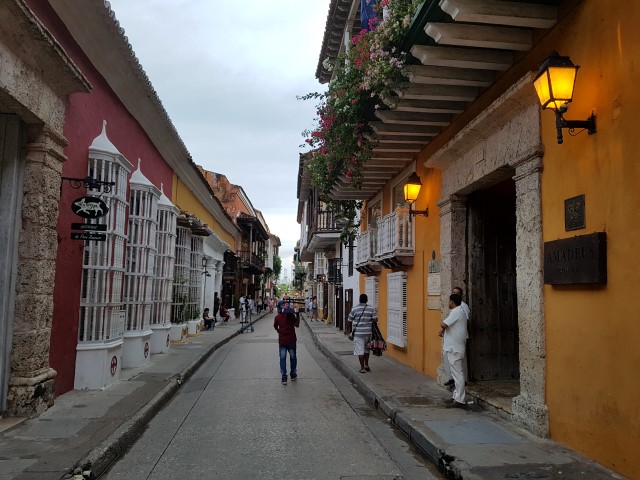 We ate the worst meal of our trip in a small Italian restaurant. We were the only customers, and it soon became apparent why. I ordered the Anthea-travelling-classic: pasta with tomato sauce. It seemed someone had sent back what the chef considered to be a perfectly good carbonara, so he had heated it up and dumped some tomato sauce on top. I asked in our restaurant the second night if this was a Colombian thing and the waiter was utterly horrified. Dan received a meat salad. A pile of different types of chopped up meat on a plate. Even for the most carnivorous palate it would be nauseating. I can't remember the name of the restaurant, or where it was. But don't go there.

On our second and last day, we went to the San Felipe de Barajas Castle. I do always love a castle. There wasn't much of a hike, or many steps, which is unusual for anything in Colombia, and we had a nice view of the city. Sub-standard ice pops though if we're honest. We spent many hours trying to buy stamps for the rare and elusive postcards we'd managed to pick up. When we finally got the stamps (in a sort of art gallery/keyring shop, of course), a local reminded us it was Saturday so the (one) post office was closed. We asked them in our hotel to post them. We will see.

It certainly doesn't deserve its reputation. At no point were we even close to getting kidnapped by FARC guerrillas. If you are sensible (don't go past street 13, don't shuffle wads of cash in public, don't get dodgy looking public transport) you'll almost certainly have no issues. There are truly beautiful places outside the cities, filled with tropical rainforest, lakes and colourful colonial buildings. And Santa Marta and Cartagena are beautiful in and of themselves. Don't skip Bogota, but don't spend more than a day. It's interesting, and good to see the less pristine parts.

Stuff is incredibly cheap. Food, accommodation, tours. It seems bewildering because they put 20 or so 0s at the end of their currency, but you're usually only paying a few dollars for virtually everything. The people in general are hugely friendly and helpful, and will do everything they can to understand your awful Spanish.

Like Guatemala, don't be put off by the odd hysterical eejit on Trip Advisor who heeded none of the advice and got robbed while comparing Rolex watches in loud slow English on a rural chicken bus.