Blog
About
Stawell and Adelaide
Previous
Next
Sept. 22, 2015
Australia
travel

When I lived in Galway I'd often drive across the width of Ireland to Wicklow for the weekend. It was lengthy and boring. What I didn't realise was that there's no such thing as a long drive in Ireland. Australians wouldn't think twice about 2.5 hours Galway to Dublin. In fact, last year when Dan and I visited Melbourne, some family friends of his offered to drive 2 hours to see us for tea in the airport before we left. Australia is so vast that driving here becomes negligible, unless you're going to say, Darwin.

Due to some unfortunate circumstances, the friends in question (Myriam and Robert) couldn't meet us in the airport after all. So this time, we embraced the Australian mindset and drove 8 hours to Adelaide, stopping in Stawell to visit them.

Australia is no joke

Stawell is a little mining town surrounded by scenery. The most notable scenery is The Grampains, a national park featuring a series of mountain ranges and many kangaroos. It was very exciting the first time I saw a kangaroo but you soon realise that they're everywhere and don't do much. 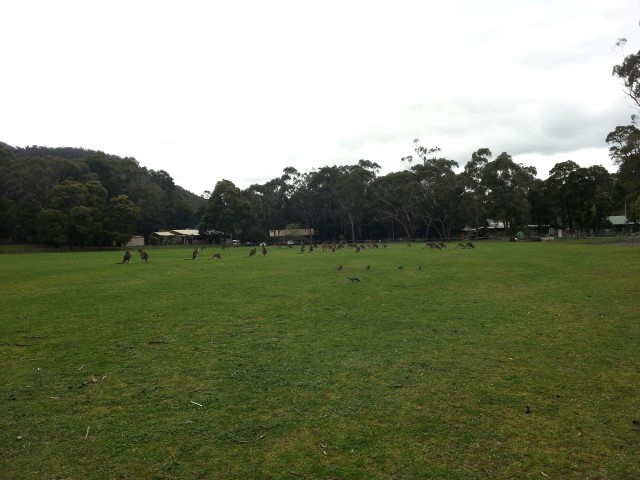 About 50 blurry and distant kangaroos 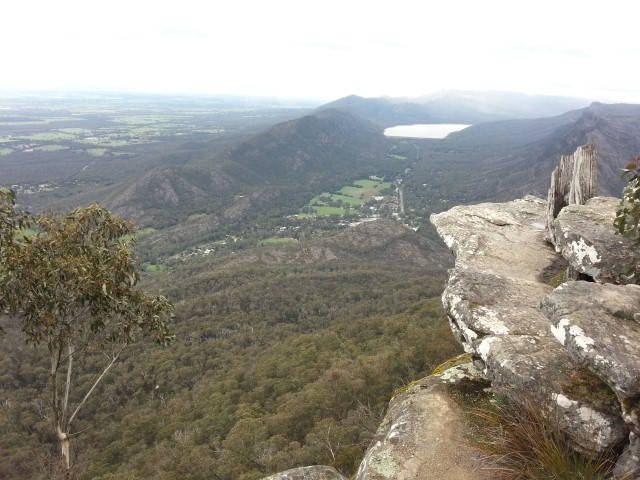 There's a viewing point where you can watch what's going on at the top of the mine. Lots of machinery and activity. I actually rather liked this view for some reason. Industrial. 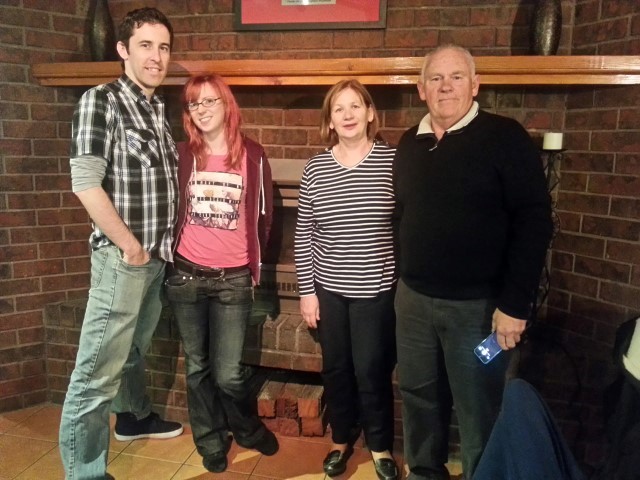 Myriam and Rob who gave us food, a bed and showed us all around Stawell

That night they brought us out to dinner. My mother would be so ashamed of me, because we made a huge etiquette blunder. The first time we went to a bbq in Australia, she rang me to say "Make sure you bring something. This is what Australians do. They bring things. MAKE SURE YOU BRING SOMETHING." This time I knew the etiquette so went to select the finest wine. Since I know nothing about wine, I had to ask what a fine wine actually was. But we forgot it. We forgot everything. We had nothing. And they wouldn't let us pay for dinner. So now I feel bad and my Mum is going to be cross when she reads this. 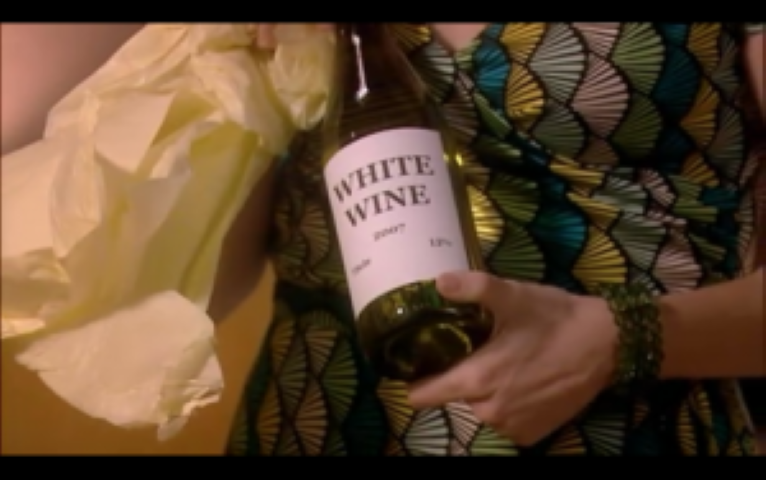 This is the extent of my wine knowledge. I would have brought a wine called 'White Wine'.

Ever since reading Yes Man I've really wanted to see some of the Big Things in Australia. The Big Things are sculptures, often of fruit and animals dotted around Australia. In skimming the Wiki article I just linked I realised we've actually seen a couple already without even knowing, including the Big Purse in Melbourne and the Big Miner in Ballarat. Pity I didn't read that article sooner or I could have given a greater purpose to my time here.

Anyway, the point of that was the Giant Koala in Dadswell Bridge. 14m tall and terrifying. I gave it a hug. 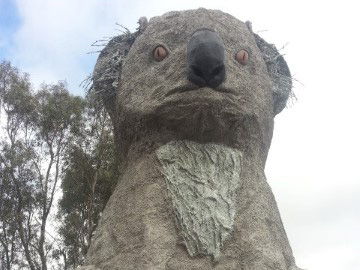 It will haunt your dreams

A bit further on is Little Desert. I'd asked Myriam and Robert the closest we could get to 'outback'. They kindly explained that we weren't in the Northern Territory, but there was a place called Little Desert National Park nearby that was sort of outbacky. It was, I guess. Not orange enough for my liking, but rather pretty and rugged once you got in a bit. Also full of kangaroos. 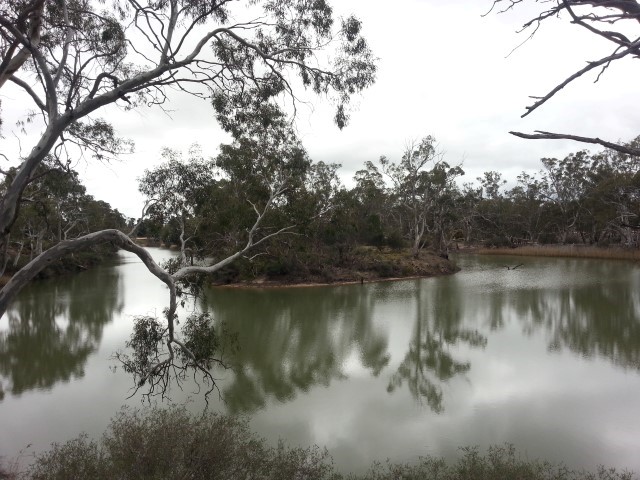 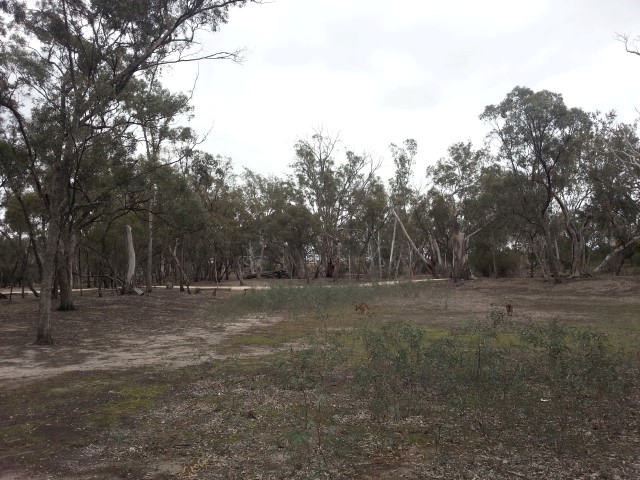 You don't really drive into Adelaide, you kind of roll down the hill for 25 minutes, alongside enormous cargo trucks with hopefully powerful brakes. The descent and ascent to and from Adelaide was our little Micra's greatest test and I'm delighted that it passed. We met my cousin Frances and her boyfriend Rob upon arrival and ignored all attempts at conversation and civility until they found us some burgers to eat. They showed us the city centre, which is much like any other city centre, though bigger than Australians lead you to believe. I've had it with city centres at this stage, so was happy that Frances's plan for our one full day in Adelaide involved no actual Adelaide.

She brought us to a waterfall that had wild koalas and an orange-coloured cave. On a 'How Australian is this' scale I'd give it a 7. I'm deducting 3 because we didn't get attacked by any crocodiles, sharks, spiders or snakes. If anything I felt a bit TOO safe. 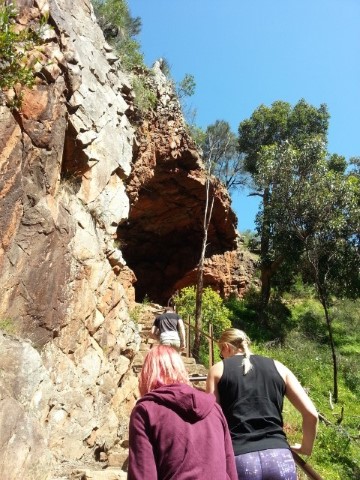 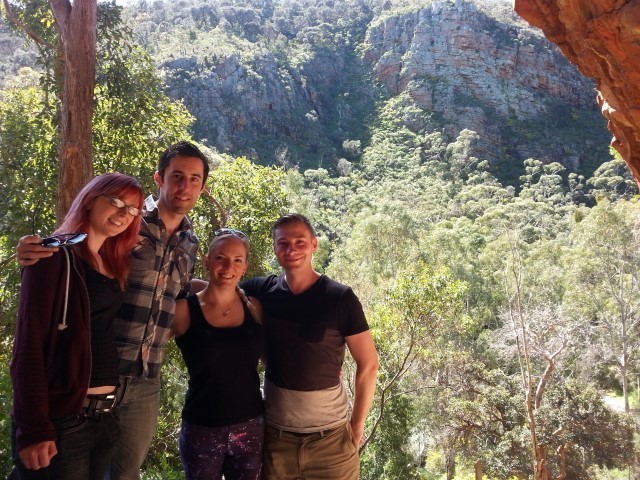 Inside the orangey cave 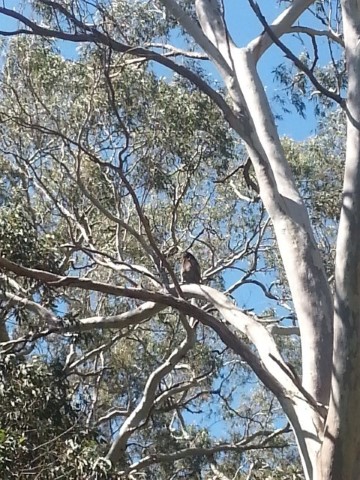 There is a koala in there somewhere 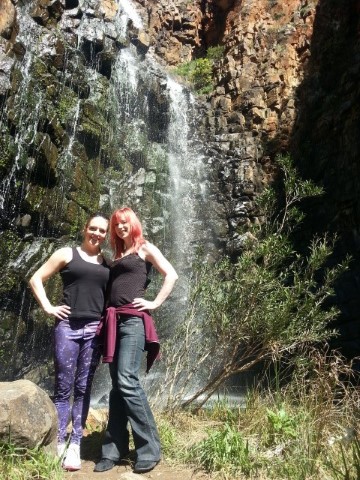 Next stop was a Very Tall Thing, this time a mountain summit, so we could see Adelaide from high up. This was 1pm and everyone was hungry so it was decided that we'd eat first at the base of the summit. Rob asked his satnav how to get to the cafe at the base and the satnav, lacking altitude knowledge, brought us OVER the mountain peak. "We're going pretty high for the base of the mountain no...?" We asked helpfully from the back of the car. Eventually we all had to agree that we were, in fact, at the summit. There was no denying it. A brief discussion took place about whether or not we should just look at the mountaintop stuff before eating. No one is interested in scenery when they're hungry so we drove all the way back down and spent the next two hours in the cafe, missing all the mountaintop stuff completely. 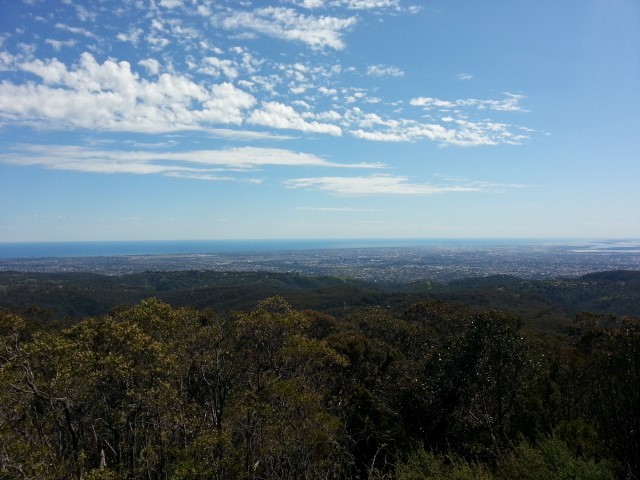 Not to worry though, because Dan and I swung by the summit on our way back to Melbourne the next day. We were disgusted to see Pay and Display machines. Three dollars?! We basically saw the view from the car yesterday! Nonetheless we grumpily rummaged through pockets and wallets trying to assemble the extortionate fee. 2.20 was all we had so we compromised and took turns sitting in the car while the other ran up to the viewing point. Romantic.

The only remarkable thing about our 8 our drive back was that the Giant Koala had glowing red eyes but unfortunately we didn't get a picture.