We drove from Auckland to Hobbiton via every possible backroad courtesy of an unchangeable setting on the satnav. We made great time, arriving at 1 in the afternoon. Hobbiton first, we thought, onto the wildlife park to see kiwis, then some hot springs, drive around Rotorua, then go to the hotel.

'Did you book?' The stern lady behind the counter asked us. Of course we didn't book. 'You have to book. We have spaces left on one tour, at half three'.

This was certainly a pickle, is not how we phrased it at the time. Figuring we couldn't miss Hobbiton, we signed up for the 3.30 tour. Driving to any of our other destinations would have meant a 40 minute drive there, a few minutes to look around, and a forty minute drive back, so we just ate a very prolonged sandwich and went back to Hobbiton.

Hobbiton itself is genius. The set for The Shire in Lord of the Rings and The Hobbit was built in part of a very hilly 1200 acre field belonging to a farmer. A set scout found it, and asked if they could use it. The farmer, seeing a load of cash in his future, obviously obliged. Peter Jackson then got the army to build a road through the field so they could all build and access the set. Now the clever bit is that the farmer owns the field with the road, and there's no other access point. So if you could somehow get to actual Hobbiton (the area with the Shire set) you could go for free. But the road is on private land. So he set up a little hut and charges people 75 dollars a go. 1pm on a Wednesday and the place had only 2 spaces left for the entire day. That farmer is doing well in life.

I've been to the Harry Potter studios and was expecting something similar; props, wooden fronts with nothing behind them, halves of huts, huge gaps for CGI. Hobbiton is nothing like that. You are actually in The Shire. For The Hobbit, they built the whole Shire properly. All of the hobbit holes are accessible (though you can only go into one, and it contained a broom and some folding chairs). They're varying heights for perspective reasons during filming and the amount of detail is immense. Peter Jackson had people tread one of the little paths every day because he figured realistically it would have footprints. The path features for about 2 seconds of the film. All these little touches aren't casually noticable, but presumeably they really add to the authenticity as a whole. 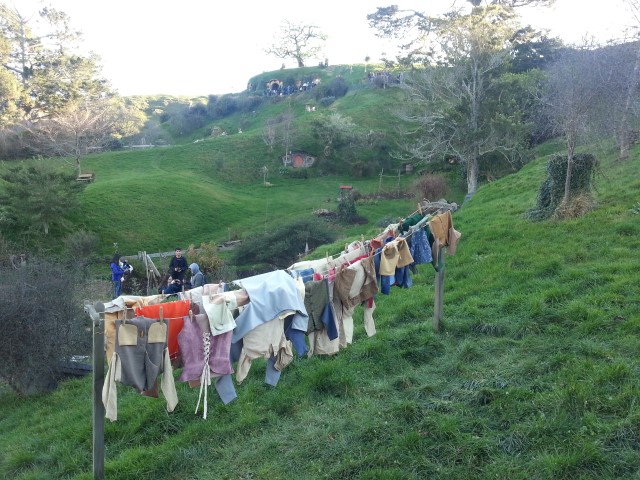 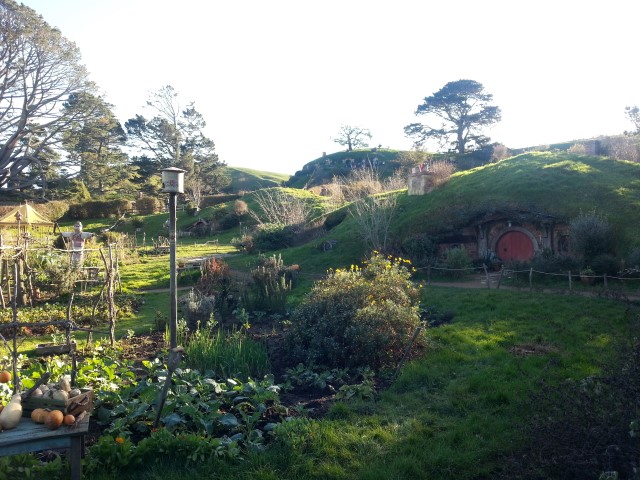 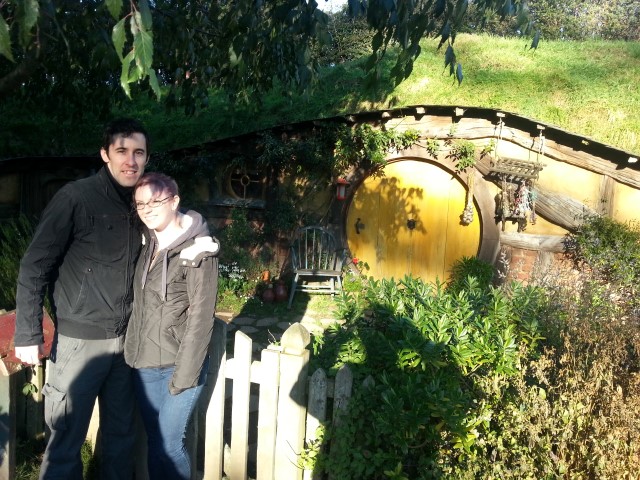 The tour ends in the Green Dragon pub where you get a free beer. It's adorable (the pub, not the beer). A fully functioning Middle Earth tavern. They do functions there. That would be an epic (and epicly expensive) wedding reception. 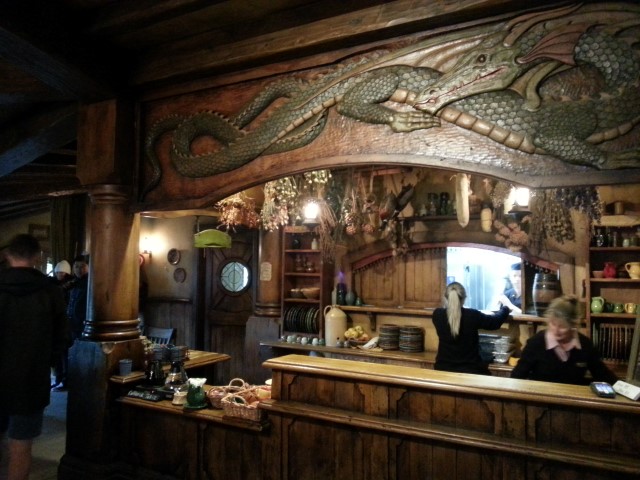 A handy leaflet told us about Hell's Gate, a hot spring spa, just outside Rotorua. I say a handy leaflet told us. If we had done any planning, we could probably have found this on the Internet (though not New Zealand hotel Internet while is invariably awful). It opened late which was particularly handy given the earlier fiasco. You put on your swimsuit outside, at night, in freezing cold weather, and sit in a natural sulphur mud pit. The weather was so cold that the paths kept icing over. The mud pit is hot which is a relief, but smells of sulphur. I could deal with the smell, all of Rotorua smells of sulphur, but my eyes couldn't and I had a horrible reaction to it. The twenty minutes I spent there before my eyes couldn't take it anymore were enough to ensure I smelled of sulphur for the following four days. It doesn't matter how much you shower. The only thing that gets rid of the smell is time. My friend Fran, experienced in the matter of sulphur pits, told me to bring clothes I could throw away. I did, but in the end couldn't face throwing them away so carried a suitcase full of sulphuric jumpers all through NZ and back home.

The next morning we asked reception how the weather was for our impending drive to Wellington. The nice man looked it up and said: 'I'm afraid all roads all closed.' ALL ROADS. There wasn't ONE ROAD that could get us from Rotorua to Wellington. Coastal roads? No. Nothing. We had to get rid of the hire car somehow so ended up driving all the way back to Auckland and flying to Wellington.

I read a book a few years ago which I highly recommend to everyone called Last Chance to See by Douglas Adams and Mark Carwardine. They go around seeing critically endangered animals. It's rather sad but a really interested and entertaining read. The one animal that particularly fascinated me was the Kakapo in New Zealand which you can read about here. It's big, plump, cute and flightless and there were loads until humans came in and ruined everything. In 2009 Stephen Fry and Mark Carwardine went and revisited as many as they could in a TV show of the same name. The breeding programme had gotten the population up to about 120 which is still devastating. Anyway, the point of all this is that I really, really wanted to see one but we completely ran out of time. On the way back to Auckland we stopped in a bird sanctuary and did get to see kiwis and similar looking birds called Keas and Kakas, the latter being smarter than a chimp, which was nice. Kiwis are nocturnal so unless you go at night it's not very spectacular. They're very cute though. 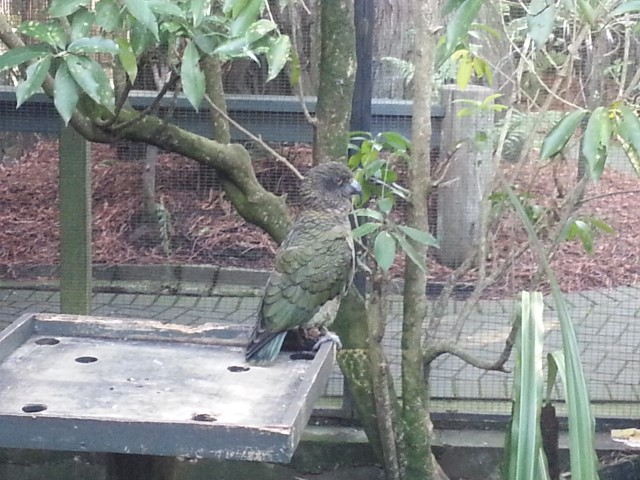 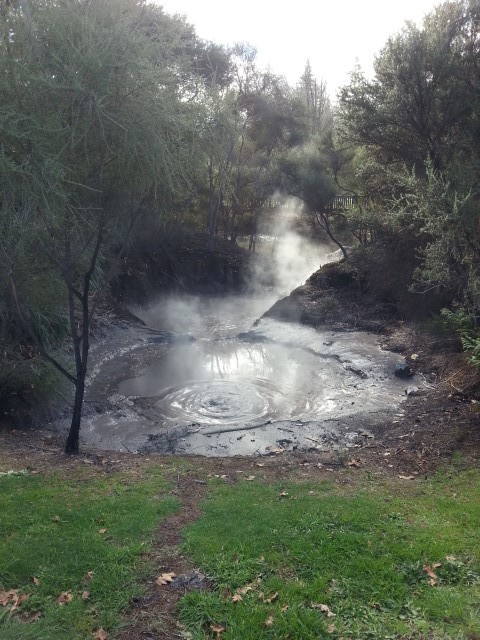 While driving back through Rotorua we stumbled upon some natural sulphur springs. These are pretty spectacular hot bubbling mud pits, that put you in mind of medieval witches making spooky prophecies. They probably didn't come here though because even medieval witches don't want to smell of sulphur all the time. My advice would be to skip bathing in them and just look at these ones instead.