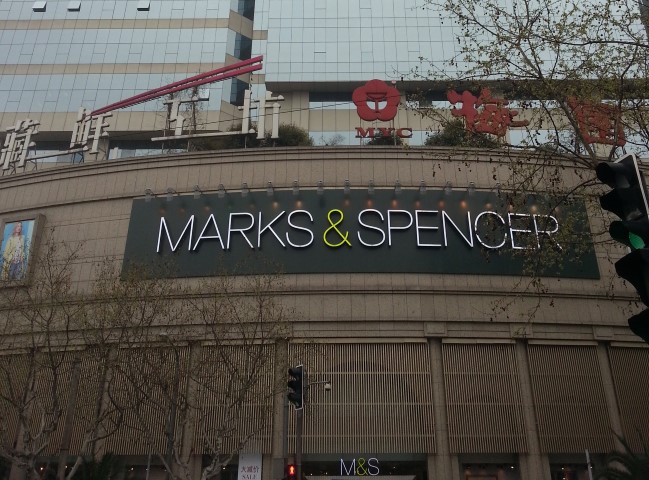 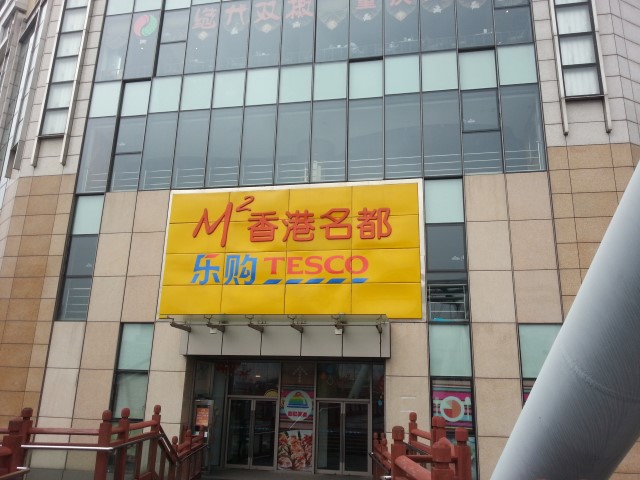 On our first day we encountered some top class scammers. Two girls with perfect English approached me and said "Oooh you're so pretty with your blue eyes!". This was clever because everyone likes to be told that, and at this point I was used to Chinese people constantly taking photos of me (although they never actually tell me I'm pretty, so maybe if my vanity hadn't gotten in the way we could have gotten out of this mess sooner). Anyway, I was delighted. Instantly engaged in conversation with them. The first girl chatted away about how they were on holiday and were looking for things to do and it all seemed quite normal until the second one stepped forward and started reciting a script. It was so blatant that sometimes she stopped mid sentence and looked off into space trying to remember the next line.

"There is an ancient Chinese tea festival on this very week. It is very important to the people of Shanghai and..." she pauses, consulting her invisible notes, "today at 2pm, we would like very much if you could join us."

Dan grew suspicious, meanwhile I was still happy, chatting away. After a few minutes they would only talk about this tea ceremony and kept asking us to come with them. I couldn't understand why Dan was saying no. Traditional Chinese tea ceremony?! Sign me up. When we tried to leave they kept veering us across the road, insisting it would only take 20 minutes of our day. Eventually Dan managed to drag us both away. A quick Bing Trip Advisor search later (not even Shanghai scams, just Shanghai) returned, as its third result, beware of tea ceremony scam. A lucky escape as I felt guilty for ages afterwards that we had just cold shouldered these lovely Chinese girls.

The Bund is a promenade that runs alongside the river, and is itself a nice attraction. The Other Side of the River has some very tall, very glassy buildings, mostly housing Louis Vuitton stores. We took the Sightseeing Tunnel, which was such a bizarre experience that it was worth our 6 euro.

You get into a little train carriage which goes through a tunnel under the river. On your way down to the train there's pictures of fish, so you think maybe it's a lit up glass tunnel, like an aquarium. It isn't an aquarium. It's a laser light show. Like if Pink Floyd had a budget cut and replaced their special effects guy with someone's younger brother who "did a bit of that stuff in college". The tunnel is black and projected swirly lights show up on the walls, sometimes LEDs. It's meant to give you a weird sensation of travelling through... A light tunnel I guess, but it's too illuminated and you can always still see the train tracks and the walls. Then a voice will bellow some stuff in Chinese followed by 'MAGMA', whereupon the walls go red. Towards the end he says 'METEOR SHOWER' and silverly lights zip past you, before your carriage arrives and you lumber off feeling very confused. 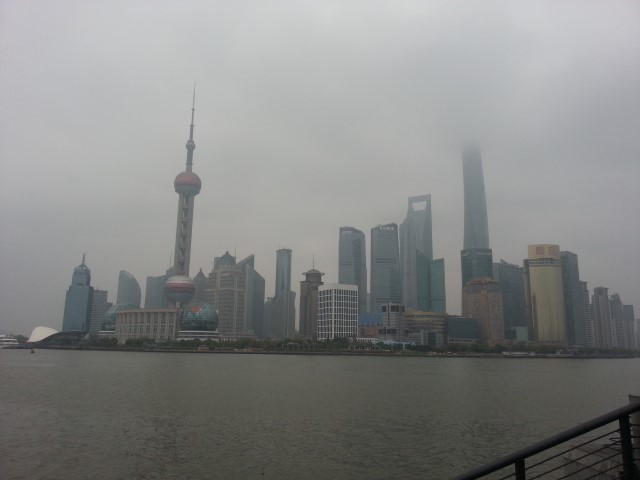 Skyline Through Mist and Smog 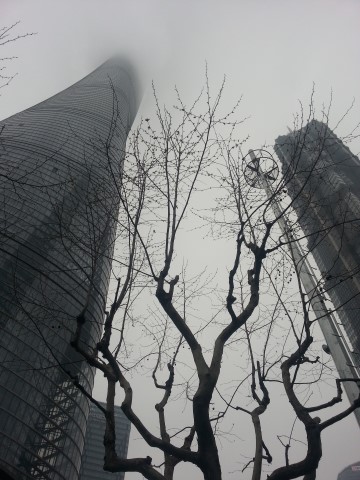 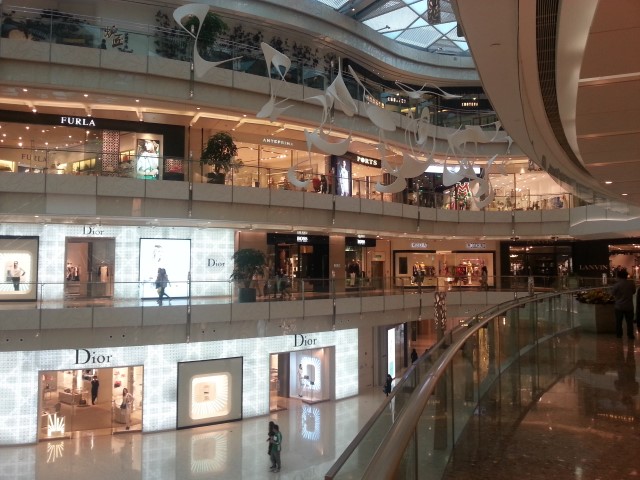 The Bund at night is a top rated attraction, so we walked down the very wide main pedestrian shopping street towards the river. From the subway station, about halfway down that street, all the way to the Bund, the crowds were like something you would only see at a sold-out stadium concert. The street was fully wedged from edge to edge and you just got dragged with them. I imagine this is a lot easier on a weekday, but sadly we were only there for Saturday and Sunday. The Bund itself had a beautiful skyline at night, but the amount of tourists took away from it a bit (Dan and I don't count as the crowd, of course.) There's a bit of a colonial feel about the promenade, and it reminded me of London. 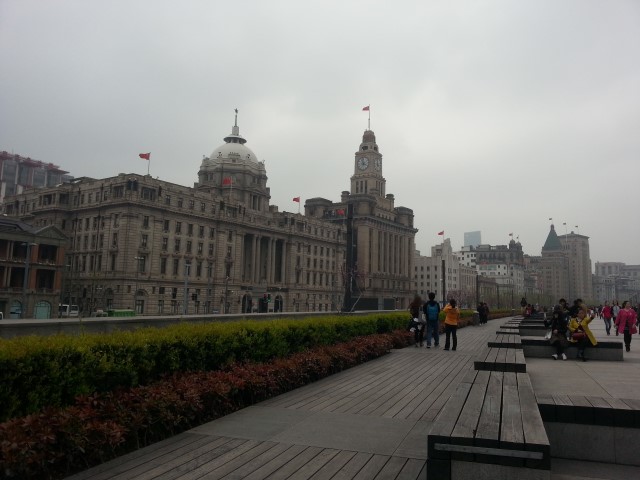 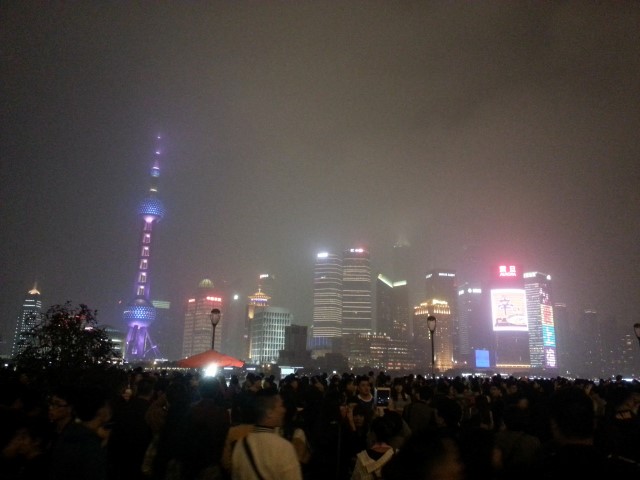 The hole in the suitcase had survived two flights at this stage but things were getting critical so instead of flying ¾ of a suitcase to Japan I decided to venture to The Fake Market in Shanghai. The Fake Market is a real market, in spite of the name, but it sells knock offs. It is quite literally underground, accessible only from a subway station. Dan is a master haggler and got me a fine new suitcase for 25 euro. Only time will tell but it's holding up pretty well so hopefully it was stolen, rather than shoddily made.

We decided to take a different route back to the hotel to collect our bags on the last day, through some more authentic side streets. By authentic I mean no Louis Vuitton shops. That's how we found an utterly stomach churning food market. This wasn't like the scorpion-on-a-stick Beijing food market, made to horrify and entice tourists. This was a real market (in a very poor area). Stall after stall of butchers stripping meat, fish flapping about on the street before dying, people handling full raw chickens while deciding what to buy, meat bits everywhere touching all the vegetables. You couldn't pay me to eat a lettuce leaf from that place. But the saddest thing was that this was only a 5 minute walk away from the glitzy highstreet.

There are lovely parts to the city, such as the historical French quarter (albeit mostly used to house designer shops), the traditional-style centre market with a stream running through it, it's easy to get around and definitely easy to eat. However it's hard not to find the massive Dior and Louis Vuitton shops a bit disingenuous when they're so close to streets like the market above. It comes across as a veneer, trying to hide those streets away from the tourists.