Most DIY guides you read on the Internet are, rightfully, written by people who know about DIY and are good at it. So I'm here to fill the niche of DIY Guides from Someone with Enthusiasm and the Ability to Watch a YouTube Video.

A year and a half ago, Dan and I bought a flat. Years of Grand Designs brainwashing instilled in me a dream. A dream to buy a derelict old wreck of a money pit and transform it into a beautiful quirky home. My dream never featured living in an on-site caravan over 3 brutal winters, getting pregnant 2 months into the renovation and running out of money, so I kind of cherry picked my Grand Designs fantasy.

Anyway, it didn't work out like that. It turns out, buying a flat in Edinburgh is very hard. The bank won't give you a mortgage for a derelict wreck, and we spent over a year getting harsh rejections (my favourite was blind bidding on a flat in Marchmont. We weren't told the winning bid, only that we were 'the bottom of seven by tens of thousands').

Eventually we bought this flat. It was not a wreck but it did fulfil my deal-breaking criteria of being over a hundred years old. As a non-native, I cannot fathom why anyone would move to Edinburgh – which essentially looks like Hogwarts – and buy a new build. The natives don't agree with me but they also think Irn Bru tastes nice and call all drinkable liquid 'juice' so I don't know. It's the top 2 floors. Interestingly, the door for downstairs is on the other side. A traditional Edinburgh Colony flat.

The flat was perfectly fine, but we still did a lot of work on it (that 'we' heavily features my parents, and Dan's family painted the whole place for us). So that very lengthy intro leads me seamlessly onto my first ever house drama DIY blog post.

And it's about sanding. Specifically, sanding the bedroom floor, because the stairs deserves its own blog post.

Sanding is the worst. I hate it. Dan hates it. Everyone hates it. And fuck every YouTube tutorial that has some smug git with one of those light-grit sanding sponges restoring an ancient bedside table ravaged by years of paint and varnish.

My dad told me to buy a belt sander and I had a sanding head for the multitool already. He also gave me an orbital sander. I now own a lot of sanding equipment. I bought another one of my own volition. That's four electrical sanders. I kept seeing people on home shows using different types of sanders and I thought well I have to try these other sanders. It's not unlike that time I bought three waffle makers, in search for the perfect homemade waffle. Except I, at best, think waffles are okay. I used each one once, and all three are in my parents garage and we occasionally argue about throwing them out.

We hadn't even put down the deposit and I was mentally ripping up the pale pink/brown (it's hard to explain how that was the colour, but it was) carpet. Unfortunately, under the carpet was surprise laminate.

Side note about the laminate. Ripping up laminate is fine, but not so fine when there's a dividing stud wall halfway across the room on top of it. We had to decide whether or not to knock the wall, or cut around it. We cut around it with the multitool, which took hours and was a truly miserable job. My friend Sam offered to help with the DIY fun so I left her doing that.

Under the laminate was a perfectly good wooden floor. That'll be easy to sand. We'll just watch a YouTube tutorial and hire a Jewson industrial sander.

Don't ever sand a floor yourself. Hire someone to do it. It was about a third of the price to do it ourselves, but it's days of exhausting work. The floorboards are ancient and warped, so you have to take a lot of layers of wood off to even start getting at the grime in the lower hollows. The industrial sanders are a nightmare to manoeuvre and the dust collector exploded twice. At the end we had to go over it all with the belt and orbital sanders to get the in betweeny bits.

I personally think it was worth it, but of course Dan actually did it and he still wakes up screaming in the night.

Those two are done, and I may write about them separately. But the box room awaits. Hard to capture the brown and the pink, but it was there. 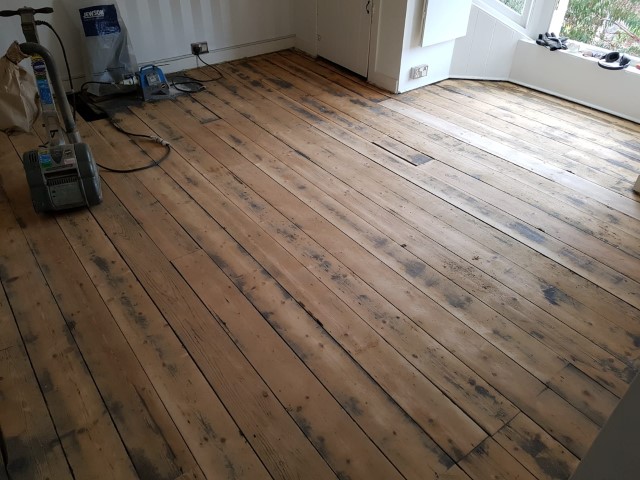 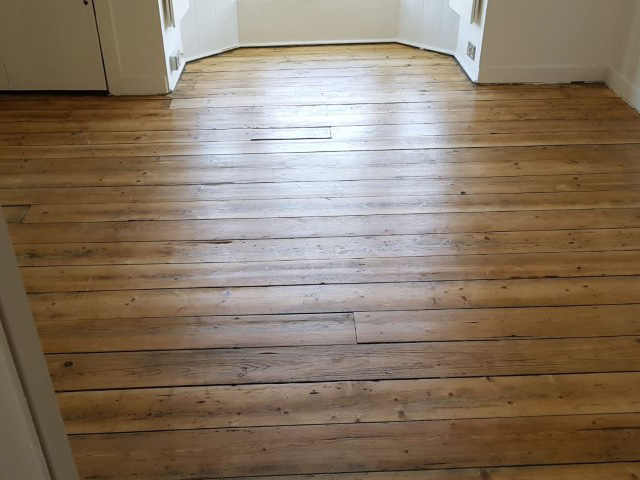