Dan and I went to New York for a week. I'm not very well acquainted with America, having only been to Vegas before now. I was assured Vegas was not representative of America as a whole, which is good because it's the most loud, obnoxious and tacky place I've been. The Grand Canyon was good though.

New York is much nicer (than Vegas, it's not very comparable to the Grand Canyon). It's very recognisable as all of television is set there. In fact the first thing we did was go see the outside of the Friends building. It looks much smaller in reality, though it's distinctly possible we were looking at the wrong building. We were staring up at it, maps and cameras everywhere, waiting for a passerby to say "you're actually one block over". We think this is it anyway. 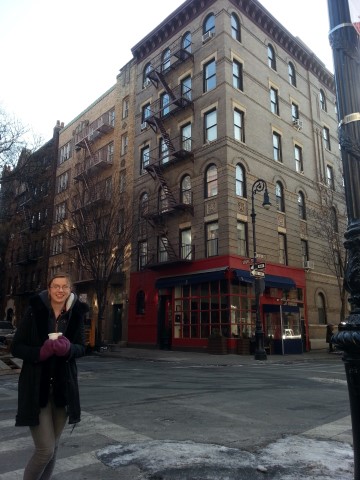 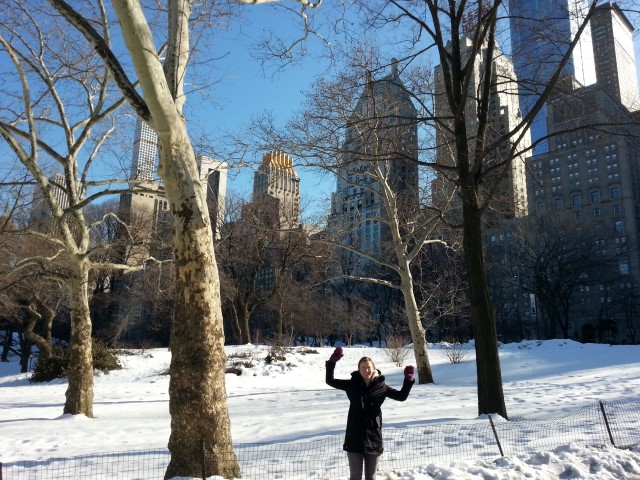 New York are currently experiencing Baltic temps. Initially I was delighted because New York in snow is heavily featured on television. The novelty wore off a bit when it felt like you were being punched in the face by the weather every time you stepped outside. It also meant I had to wear an enormous black coat that while reasonably warm, prevented me from moving any of my limbs and looked sort of like a wide black tube from my neck to my knees. Not an issue for Dan as he forgot his jacket.

We went to the Empire State Building of course. In fact we walked there, about 9km from our hotel. Dan's idea. It meant that by the time we got there (about 5pm, so we could see sunset) I was cold and grumpy and my feet hurt. I was also a tad dizzy because I hadn't eaten in a while. There are no seats up the top so I sat on the floor for a moment. Without a moment to lose an enormously tall man in a security outfit marched over and said 'MA'AM YOU MAY NOT SIT ON THE FLOOR UP HERE'. I sighed and sort of waved my hand at Dan to help me up and Dan said "she's just feeling a bit unwell". That was the wrong thing to say.

"DO YOU NEED AN AMBULANCE MA'AM?" He bellowed, attracting the attention of everybody in the Empire State Building, and possibly many people on the ground. "What? No!" I became flustered. "My feet just hurt and - " "I CAN CALL YOU AN AMBULANCE!"

Now everybody was staring with grave concern. I kept making gestures indicating that I definitely did not need an ambulance for tiredness and eventually he went away. I do feel like I probably ruined the Empire State Building for lots of the tourists though, certain they were going to come down with a terrible malady.

It was a good view though, the Empire State Building. 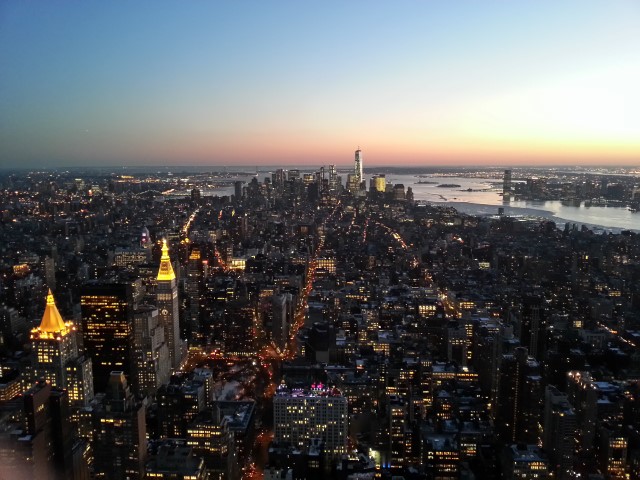 The ESB was the first of many times we would be harassed by unofficial ticket vendors who bark numbers at you for 5 minutes then whip out a credit card machine. No matter how hard we tried to veer, avoid eye contact, run away screaming, they always targeted us. "What makes us stand out so much as tourists?" we mused in our Irish accents, folding an oversized subway map into our giant backpack while taking photos of a yellow taxi.

Our handy tourist guide book gave us a great tip. Don't bother going to Ellis Island to see the Statue of Liberty. Simply get a free twice-hourly ferry to Staten Island that sails right passed it. After we both admitted, to ourselves and each other, that we were not particularly fussed about being face to face with the Statue of Liberty, we did this instead. A fantastic idea. It's extremely easy, takes half an hour, shows you the statue, then brings you home. I had a completely wrong perception of the statue. It doesn't back onto the Manhattan skyline and it's actually quite small. Disappointment was avoided by getting the free ferry instead of spending a shedload of dollars to see it up close. 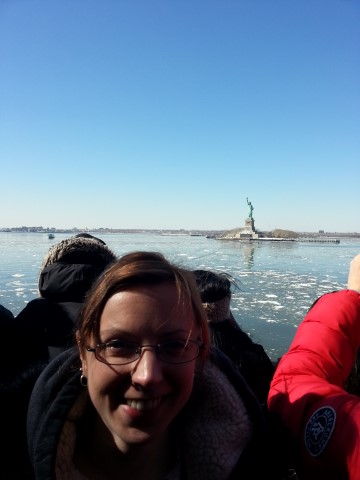 The worst picture of the Statue of Liberty 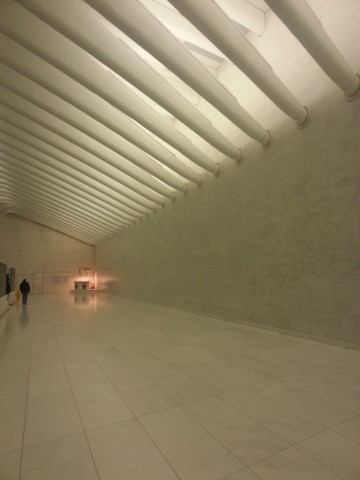 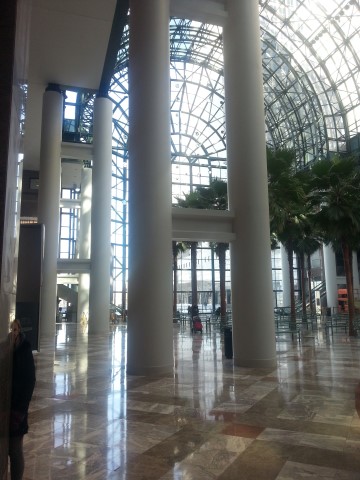 There are a lot of large, lavish, empty spaces in New York. They look like lobbies of buildings that don't seem to function as anything, though presumably there are flats or something upstairs. But then why do so many say "open to the public"? Because then we, the public, went inside and it was just that. A giant lavish lobby, possibly with a Starbucks and a shop selling expensive bags. These are everywhere. We went to Ground Zero and followed signs for the new World Trade Centre. Lots of elevators and cavernous hallways later we were met with another huge glass lobby. We turned a corner and there was an enormous, jam-packed food court, complete with a children's entertainer. How did all these people know this was here?! Were they all just confusedly wandering around close to Ground Zero and stumbled upon it? Turns out the new World Trade Centre wasn't even open yet so I've no idea where we were.

Our friends Liz and Richard live in New York so joined us for some sightseeing. Liz brought us to the Skyline. I was worried when I saw her text about it as I assumed it was another huge building. There's only so many tall buildings you want to climb (one, one is the amount of tall buildings you want to climb) but no! It's the old railway line converted into a park. Delightful! A little bleak in winter as it's covered in snow but a truly lovely thing all the same. 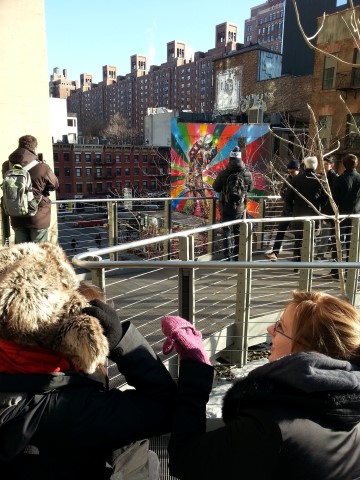 Liz and I on the Skyline

As a general rule, I'm not big on museums. I understand that other people like them but I don't get much out of looking at pictures behind glass. However, the Intrepid Museum is not looking at pictures behind glass. It's situated on an aircraft carrier and you can go down into a submarine and actually see all the engine rooms and sleeping quarters. On the carrier you go into all the little intriguing doors and see how the people would have lived day to day. They even had old men who were former sailors telling you about it in the helm. They did have stuff behind glass but that was ok. It was a museum after all. 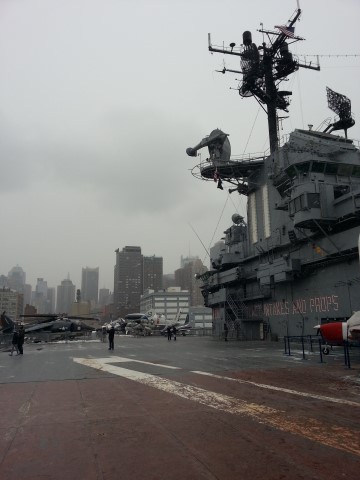 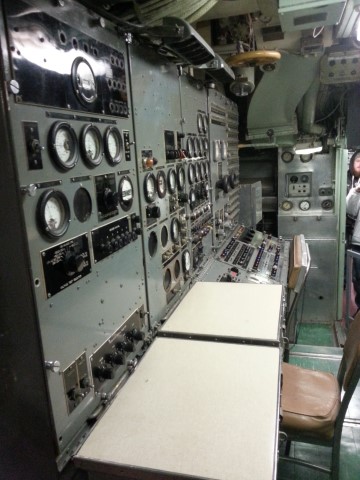 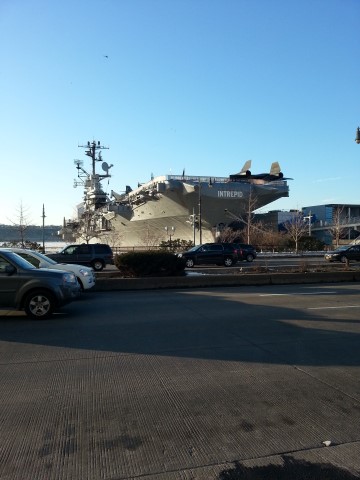 The Natural History Museum: I just looked for stuff that I'd recognise from Night at the Museum. Dan read every single placard, paying particular attention in the entire floor dedicated to different types of rocks. I was happy that they had real dinosaur skeletons though, because as a small child I thought a museum meant "place that has dinosaur skeletons". I was therefore very disappointed on my first school tour to go to a museum of history and see only glass boxes of parchment. 22 years later I have finally made my peace with that traumatic memory. 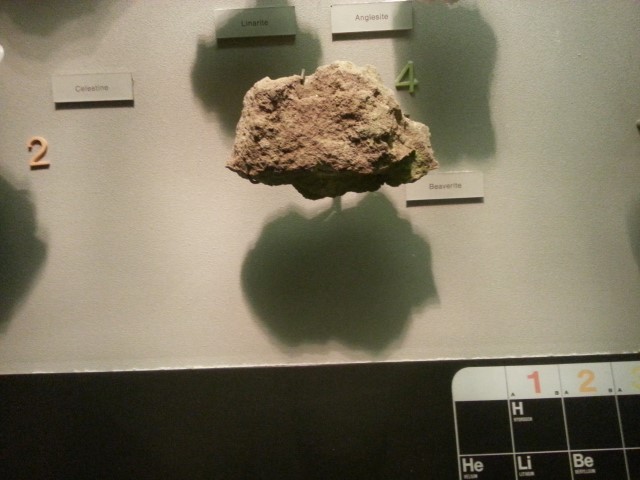 This picture embodies my feelings on museums 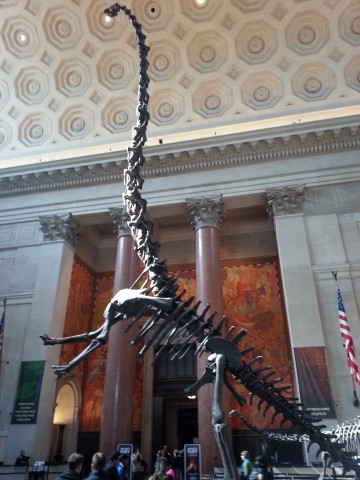 Americans understand breakfast. Every day we went to a nearby diner for a mountain of delicious pancakes. Each day we went the staff got chattier and by the end they brought us biscuits and talked with us (Dan) for twenty minutes about the Irish cricket team. It's called the Hudson Diner, on Hudson Street in Greenwich and if you're nearby you should go.

I didn't think much of the New York City Library. It didn't have any books in it. Well, it had a few tiny beautiful rooms of very specialist books (like genealogy and maps, which Dan read all of. He definitely just does this to annoy me) but mostly it was a big empty museum swarming with security guards. A totally wasted space if you ask me. That palatial lobby could easily house a giant Sci-Fi section.

What did not disappoint however was Grand Central Station. Another palatial building, but this time they had crammed as much into it as they possibly could. Trains, shops, cafes, something called the Genius Bar (I don't know what it is, but there were a lot of people on Apple Macs and a very large queue to get in. Whatever. I didn't want to go anyway.), many toilets (extremely important to the wandering tourist). I would have been much happier to give them an 'Optional Donation' than the damn New York City Library.

We looked at those shops you hear of, like Macy's, Bloomingdales and Barneys. Dan described them best. "It's like voluntarily going to the duty free part of the airport". We left shortly after.

But none of this mattered really, because what will always stand out in your mind is when your home flight is delayed by 6 hours in JFK due to bad weather. After about 4 of these hours, the Delta staff started bringing out free food. Not many people had noticed so I wandered up to get a fruit salad.

"Sorry, you'll have to wait until you're called," the lady stacking the fruit salads told me. OK I shrugged and stood back. A few moments later a man, unhappy with his airport delay, teetering on the edge of manic despair stormed up to the counter and snatched a fruit salad.

He barked an expletive at the lady that generally implied he was already unhappy enough and would not be returning his fruit salad.

"But Sir, we need to see your boarding pass," she shouted after him. He was gone. But a horrible thought hit me. I didn't have my boarding pass. My boarding pass was with Dan on the other side of the travelator. I ran, faster than the wind, grabbed the boarding pass, veered back around the travalator but it was too late. The food service had opened and there was no less than 50 people now waiting. By the time I reached the top I had transcended anger and was simply a dejected slump of shoulders.

"May I please have a fruit salad?"

"Sorry miss, there are no fruit salads left."

If you've ever seen Office Space you'll understand how closely I related to Milton: 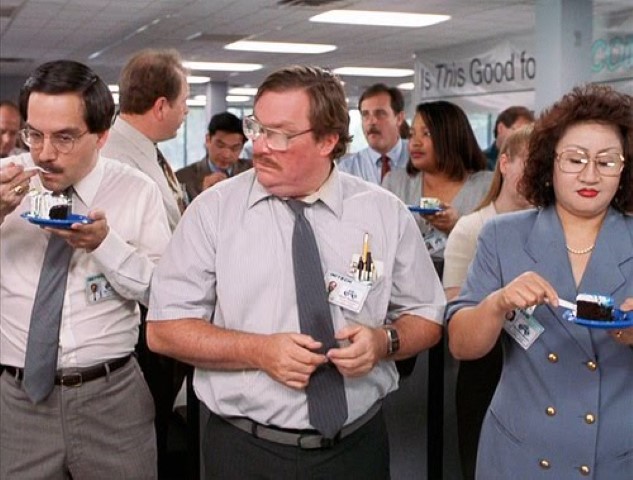 The airport nightmare aside, I think New York is somewhere I'd live quite contentedly. I'd have no money though because everything costs thousands of dollars, and the huge excess of homeless people would make me sad. I'd have to get used to the locals having absolutely no filter on what they talk about in public (one of the many interesting snippets we heard walking down the street was "And then she rings me up, out of the blue, wants a divorce!"). While I found their openness very strange, I imagine they'd find us quite rude and reserved. But Liz and Richard like it there so it must become less abrasive after a while. Dan would have to buy a jacket though.

There was also the snippet 'So now Lionsgate are PISSED' from seemingly random guy gesticulating wildly on his phone in Soho. Celebrities everywhere!