When we lived in Australia, we never saw the outback. This was due to a series of circumstances but the dominating factor was that we had a car in Melbourne and didn't want to rent a second one in the Northern Territory. If we'd stayed longer we would have made it up North. Not getting there was one of my biggest Australian regrets, especially as my parents were much more intrepid adventurers than I, and their fondest memories are outback trekking disasters. They were probably thinking 'how did we raise such a daughter, who is content to stay in her air conditioned flat in Melbourne?' 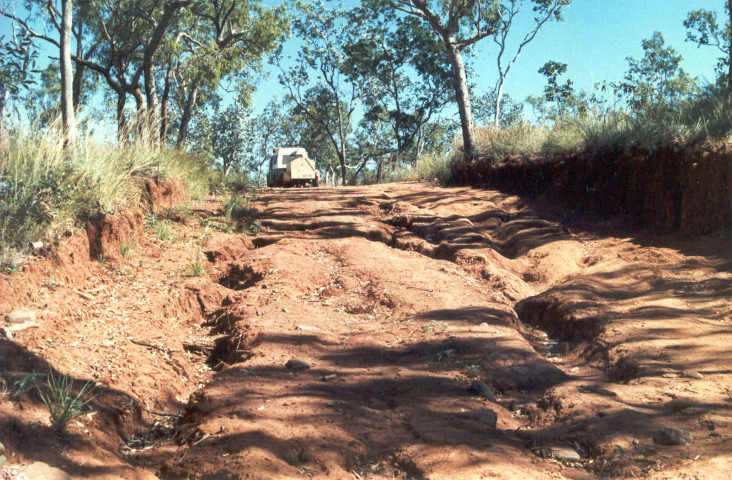 My parents, having much more hardy adventures than I 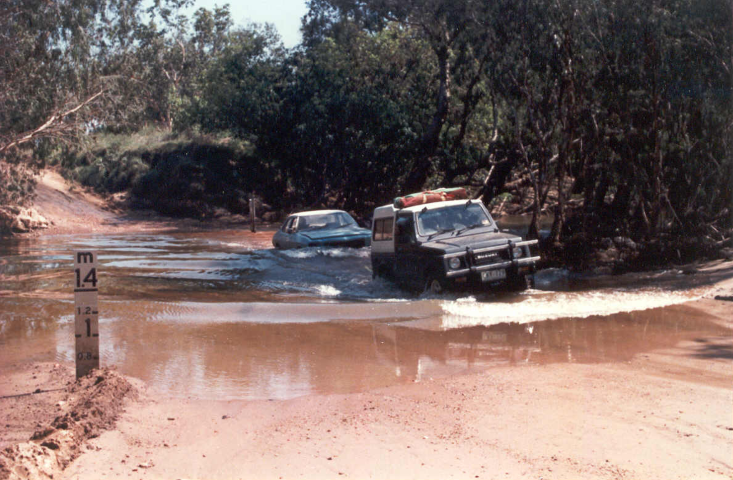 You can read the full story about them dragging this Holden Kingswood through a river on my dad's website, because you won't find any such heroics on this one.

Although I will say, our outback adventure had an air conditioned 4x4, no accompanying baby, lasted 5 days and not a tent in sight. Well, there were tents in sight, because all of the hostels/motels had a campground. But I made sure to stay well away, in case I caught any sense of 'roughing it'.

We flew from Adelaide to Alice Springs, rented a Nissan X Trail and found out that it only covered 400km and every km after that cost 25c. That was a fairly big hit to take, but we had no choice.

Internet advised you to bring lots of food, as there aren't many shops on the Red Centre Way. Taking this advice to heart, we bought every non-perishable item in Alice Spring's Coles. 4 days is a lot, we thought. Better buy 300 bags of trail mix. We also bought insect attractant, masquerading as repellent. The airport, supermarket, and hotel on our way back was all we saw of Alice Springs. It's rather a neglected place, full of poverty and run-down buildings. The scenery is nice, as they have quite a lot of green in amongst the orange roads, but it could certainly use a spruce. I figured they'd get quite a bit of tourism but perhaps people only use the airport, or stay one night like us.

On our way to our first stop, Glen Helen Homestead at Mount Zeal (the only overnight option, but a perfectly nice one), we visited 3 sites. The first was Simpson's Gap, which was beautiful if you could see through the swarms of flies intent on resting on your eyes. The second was the Ellery Creek Big Hole. It looked much like Simpsons Gap but with less flies, so an improvement. I'm not sure why it was called the Big Hole. I suppose a medium-sized lake is a hole. Certainly had I been the first to discover and name the site, Big Hole wouldn't have popped into my head.

Our last stop before nightfall was Ochre Pits, which is full of layers of multicoloured rock. The aboriginal communities used to trade pieces of it. 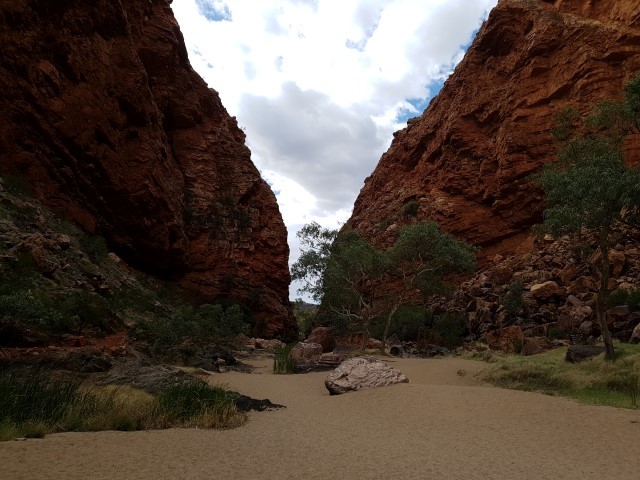 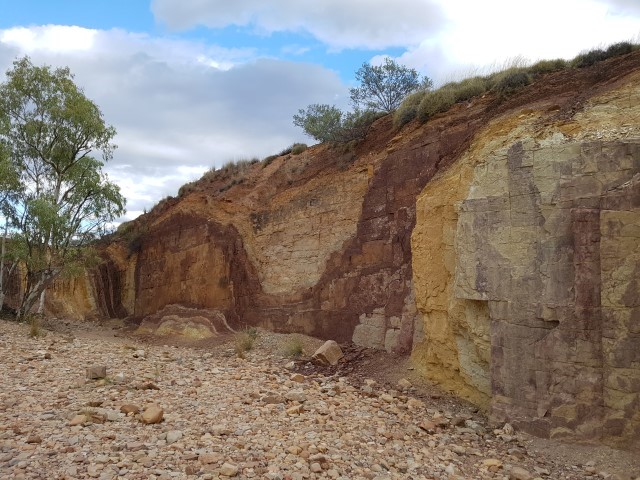 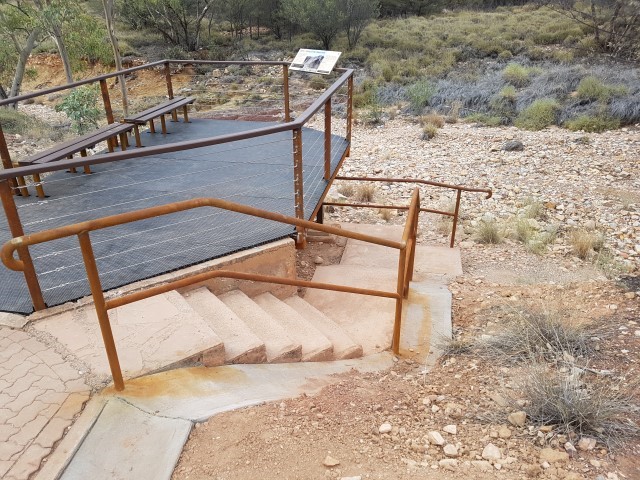 Ochre Pits wheelchair ramp could use some updating

Glen Helen Homestead, like everywhere we stayed, offered a campsite, or a room. There was wifi in the lobby, which was a surprise as there was barely wifi in Melbourne when we lived there. It was fine, but what really made it was stepping out of our door. 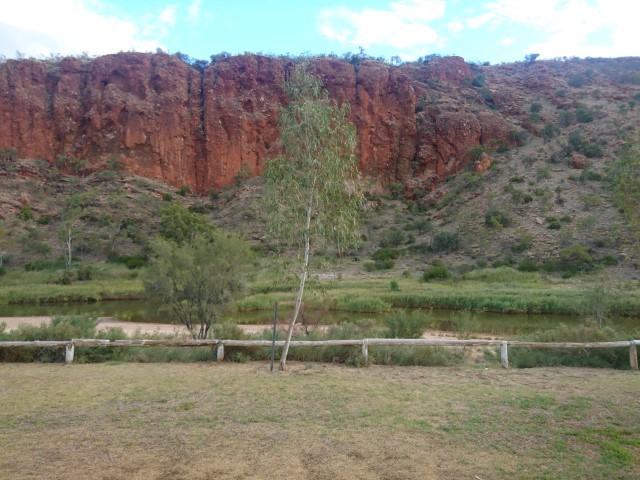 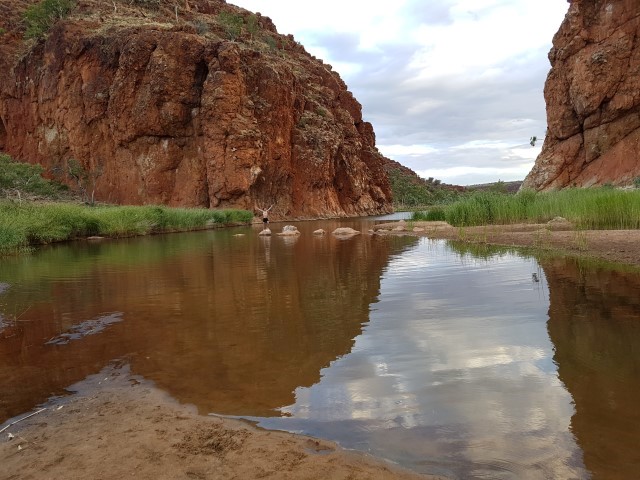 Dan swam in the nearby trecherous lake. I watched. 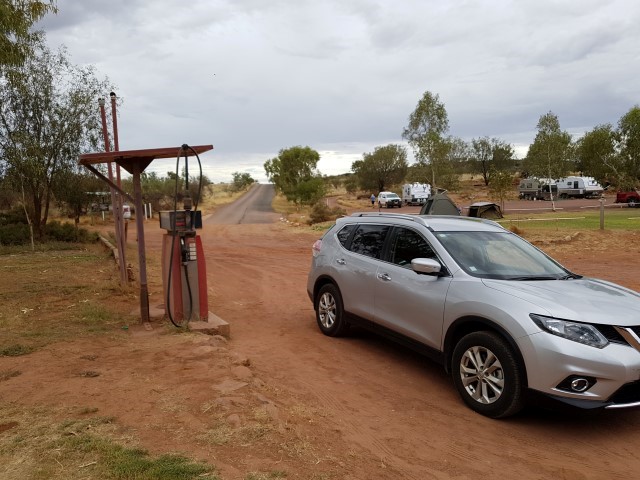 I was always scared there wouldn't be another petrol station for hundreds of kms and we'd end up in a Wolfe Creek situation. So we never stopped filling up with petrol.

Mount Zeal to King's Canyon was our only dirt road section. I convinced Dan to get excess insurance on the car, which was good because when we finished the dirt bit it certainly had more rattles than before, and several gravel-induced windscreen marks.

Driving on the dirt road was awfully fun. We drove painfully slowly at first, but after the 5th 4x4 barrelled past us in the opposite direction, quite literally leaving us in their dust, we got braver with speed. It still took quite a bit longer than a paved road, though shorter than my pessimistic Google Map estimated (4 hours, versus 7). The only stop we made on this part was the Gosse Bluff meteor crater. This was actually before the dirt road started, though the road from the main road to Gosse Bluff was the rockiest part. One great thing about all this central Australian area is that much of it is aboriginal protected land, meaning you're not allowed to climb hills. No excuses necessary, this meteor site is sacred. You can drive into the middle and have a look around, but then you have to get right back in your car again and get going. My sort of outback adventure. 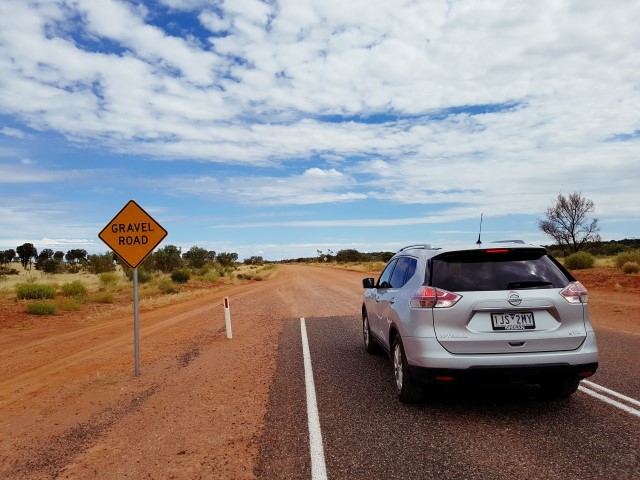 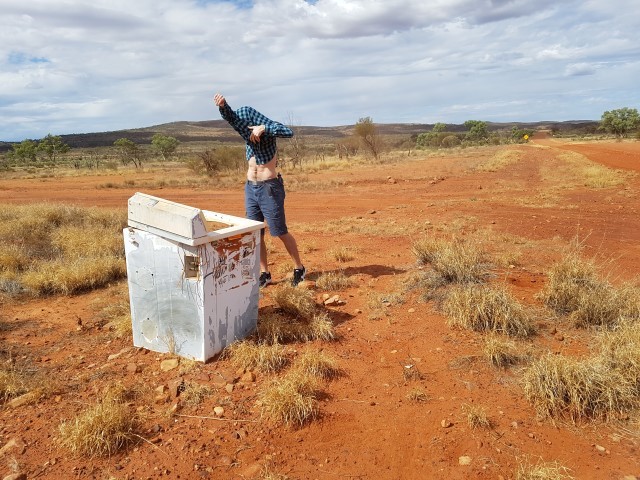 "Just when you need to get a wash on, nature delivers." - Dan 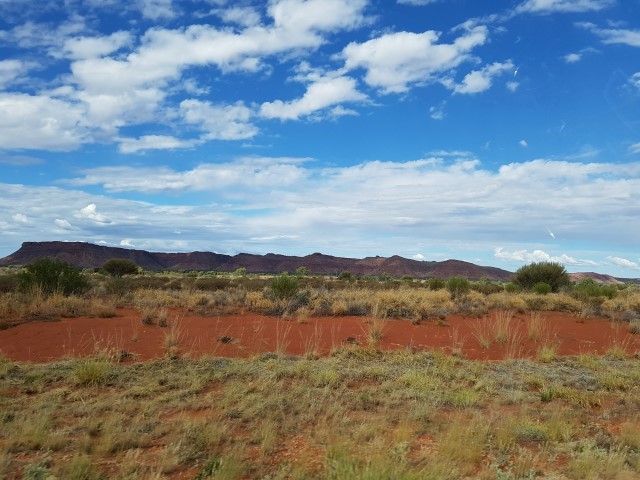 You're humouring me if you tell me these pictures are amazing. I can't even tell which bit of the outback this is from, but I think it might be the crater.

What was absolutely NOT my sort outback adventure was one where there were no toilets for 5 hours. Red Centre Way travellers with tiny bladders beware. This part is tough.

Like Mount Zeal, there was one place to stay in King's Canyon. King's Canyon Resort had a range of accommodation starting at tent, ending at fancy motel room. Ours was obviously not a tent. I'm not sure where on the range it sat, but it was nice and had an outdoor pavement area where you could sit at night and look at the very bright milky way. Only in New Zealand had I ever seen such a dazzling night sky. 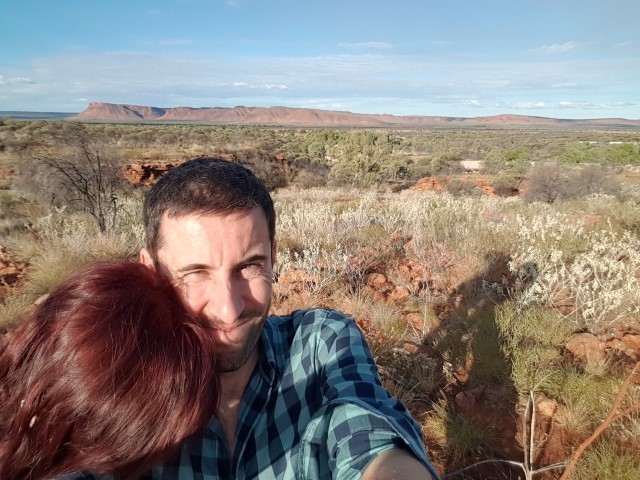 We did a walking trail near the motel and got hopelessly lost and Dan started telling me this story about two guys who got lost forever in the desert in New Mexico and ate their own arms or something.

Since turning into a vegetarian a few months ago, I've never found it tougher than I did in Australia. Australians like meat. Everything has meat. Their burger buns are made of meat. Their salads are made of meat. There's usually one vegetarian option and it was always mushroom, which I also don't like. But King's Canyon offered a barbecue where you could choose stuff, they'd barbecue it, and give you a baked potato and salad. Up until now, I'd mostly survived on potato and salad, but here they had a mushroom-free veggie burger. So King's Canyon barbecue wins.

We tried to watch the sunset but it was covered in clouds. That was fine with me. Sunsets are overrated. I remember being at the Grand Canyon for sunset. I remember thinking how cold it gets, and how I was hungry, and how bloody long the sun was taking to set, and how we still had a 5-hour bus journey back to Vegas with a fellow passenger who was carsick the whole way up. I do not remember the actual sunset. I'm assured it was nice and I'm a philistine.

Our final destination was a mere 3.5 hour drive on a paved road, which was starting to seem short. At this stage our formerly white X Trail was red, as were all of our clothes, our trail mix and even things buried in the deepest centre of many bags. This bit had lots of toilets. I think they could do with spreading the toilets a bit better.

We arrived at 3, in absolutely baking heat. It would have been impossible to see Uluru that day, as we would have caught fire, so we looked around Yulara - the local tourist town. Yet again, you have no choices in Yulara. It looks like there's a fancy hotel, a motel, a hostel and a campsite, but they're all owned by the same group. The illusion of choice. The campsite is cheap, the hotel is extremely expensive, and the other two are only very expensive. Everything in Yulara is expensive because you are hours from anywhere else, so what are you going to do? 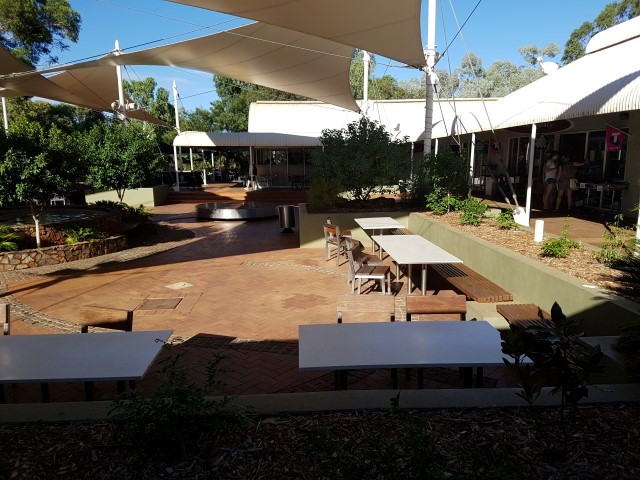 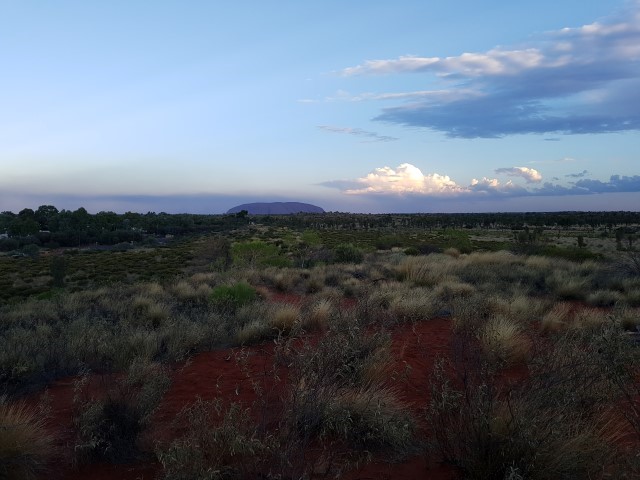 Uluru from a distance

Dan made me get up at 6 to watch the sunrise. I'd never seen a sunrise. When we stayed in Lake Atitlan in Guatemala, you could watch the sunrise from our bedroom window and I still didn't bother getting up for it. Dan did. He said it was nice.

This time, for some reason, I relented. We traipsed off to a viewing platform and watched the sunrise. Good thing we did, as we didn't realise that you're supposed to be back from any Uluru trekking by 11am. 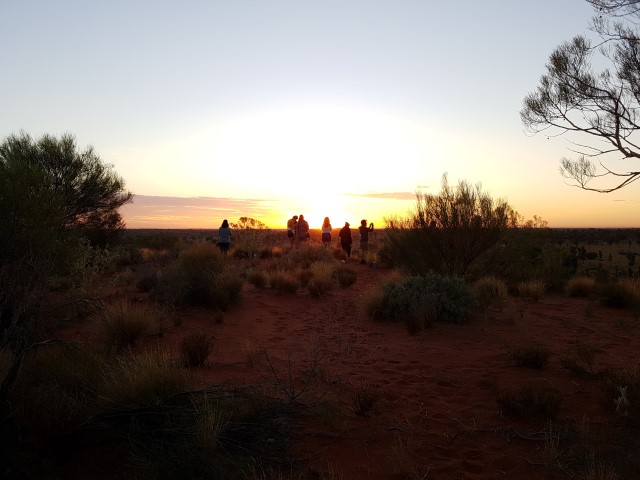 It was nice to see Uluru, though technically I had seen it once before, aged about 1 (I was aged 1, not Uluru you understand). I didn't remember it very well, so was worth going again. It's bigger than I thought. You are asked not to climb it as it is a sacred aboriginal site. Lots of people climbed it anyway while we were there. Rude, I think. Why unnecessarily upset people? Your ancestors already upset them enough. Just don't climb the rock, how difficult is that? There's also another rock nearby which you can climb. Such entitlement. Take away the safety handrail, I say.

We were too late to do the perimeter walk, because you have to be back by 11, so we did a shorter one around part of the base and back. This was a huge relief as it was about 36 degrees already. You can still see some caves and drawings, if you can fight your way through the flies.

Note on the flies: I realised that a leafy branch makes an effective and simple fly-swat and keeps them away from your face. At some point I saw a sign that said 'All of this land is protected aboriginal land, please do not break branches to use as fly swats'. So maybe I have no right to rant about climbing Uluru. I did break the branch back at our motel, which didn't seem THAT sacred. 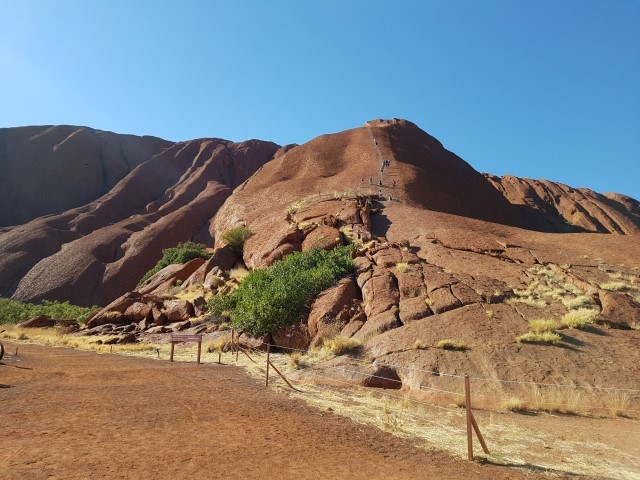 There they are climbing it for no good reason. 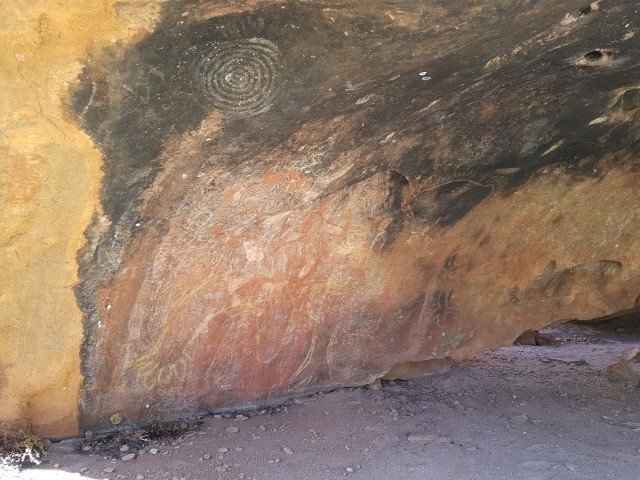 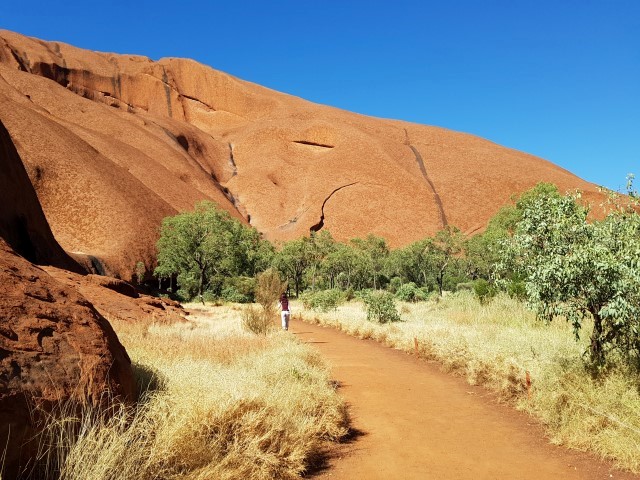 Uluru complete, we drove back to Alice Springs the “quick” way and ate in a mediocre pizza place.